Heroes of the Storm best assassin: Raynor vs Falstad 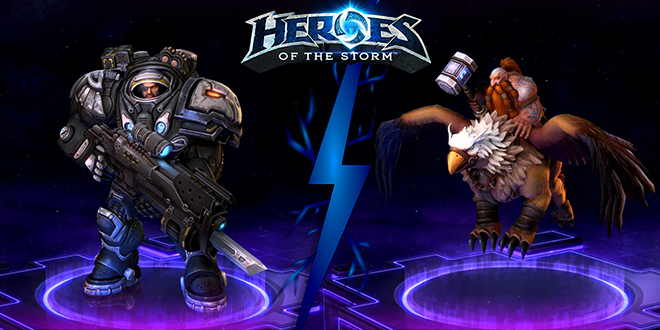 Heroes of the Storm best assassin: Raynor vs Falstad

Heroes of the Storm, the epic team brawler Blizzard created by combining years of gaming experience, brings together all their characters from World of Warcraft, Diablo, and StarCraft. Each hero is carefully created and has its own strengths or weaknesses, depending on their role. Heroes are divided into 4 types: Assassin, Warrior, Support, and Specialist. Choose a hero and fight! But who will win in a classic showdown like Tyrael vs Diablo or will Raynor be able to fight Kerrigan? It is a team fight and the hero composition matters, but who is the best? Let’s compare Jim Raynor, the leader of the Terran rebels with Falstad Wildhammer, the ruler of the Wildhammer Clan from Aerie Peak.

Raynor is my favorite character from the Blizzard world. It was the first hero you could play with when Heroes of the storm came out, so I tried to focus on Raynor to be better than the rest of the players who played him. Raynor has the ability to regenerate half of his life with the Adrenaline Rush talent, it’s a passive talent so you don’t have to click it. When you are below 30% HP the talent will soon activate to regenerate his life, so this is a plus for our Starcraft hero, but he doesn’t have the ability to evade and once you are in a fight you either die or kill someone.

But you can knock them back with the Penetrating Round and sometimes it will get you out of a fight. Penetrating Round can get better and better and at level 16 you can kill almost anyone you like even if Blizzard recently changed the level 16 talents. Before the update Raynor had a Stun and a 20% increased damage with the Penetrating Round, now those two are separate you either deal massive amounts of damage or you can stun people to help the team, that depends on the situation of the game. Allies also are helped by Raynor with Inspire, which is the last non-ultimate ability that you can activate and will give you a 30% bonus Attack Speed and half of that goes to your allies.

Raynor has the ability to dictate the pace of the game by choosing Hyperion as an ultimate, which allows you to control the fight if you use it properly, because you can either start a fight or finish it. Raynor’s Raiders will summon 2 banshees to fight with you and will make you able to easily 1v1 almost anyone. The only bad thing I have to say about Raynor is that he can’t escape a battle so his fights are until death.

After playing Raynor for a lot of time, I decided to start to master another hero and I picked Falstad, maybe my best decision between heroes. Unlike Raynor, Falstad can easily escape a fight and also gets a shield while doing that, making him hard to kill. When you are in a 1v1 situation you have 2 abilities to benefit from, beside Barrel Roll, Hammerang and Lightning Rod will deal a little more damage than Raynor, but don’t forget that you will have to damage Raynor almost twice as much before you can get the kill, because of the Adrenaline Rush talent that Raynor has.

You could choose a talent where the Hammerang ability will deal extra damage if you press Q again while the hammers is out or you could go for the other talent that enhances the basic attack to deal more damage while the Hammer is out. Either way, both of them will deal almost the same amount of damage. At level 16 you can get the Overdrive talent and by doing that, once you activate it you will deal 25% more ability damage for 6 seconds and that kind of makes you a destroyer. If you are willing to take the Mighty Gust ultimate you are going to have a bad time against someone like Raynor, yes, you will push him away and slow his movement speed but that’s not enough, remember you need all the damage you can get to kill Raynor.

To be honest, I didn’t saw anybody taking the Mighty Gust ultimate. The best ultimate for a 1v1 situation or more importantly in a team fight is Hinterland Blast. The bad thing about it is that you will have to stay still and channel the ultimate for 1 second and it goes in a straight line, that gives the opponent the opportunity to escape. Another unfortunate thing about it is that Raynor can interrupt the ultimate with Penetrating Round and that makes things a little more difficult for Falstad, because he will have to wait for about 9 seconds before he can cast the ultimate again.

All in all, both Ranged Assassins are great and give tons of damage to the opponent team, it depends on what style of assassin you enjoy. Are you the type to fully commit to a battle until you or your opponent dies, like Raynor or will you give all the damage you can and escape the battle when critical, maybe get a few kills while you are at it, like Falstad?