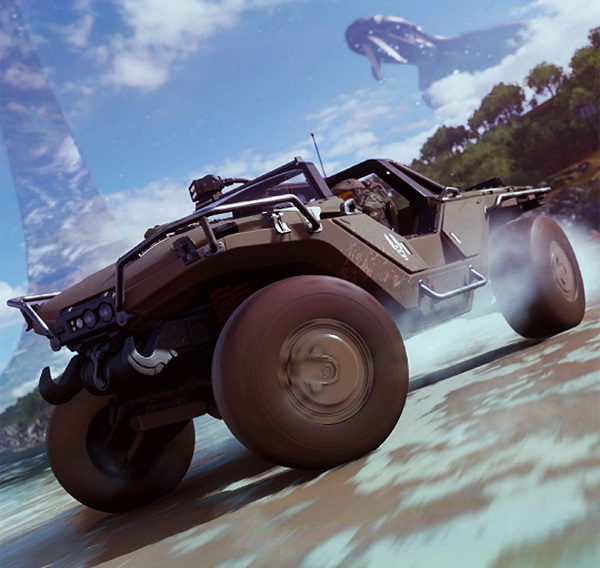 We still have a couple of months to go until Forza Horizon 4 officially launches, but that doesn’t mean its too early for some leaks. The game was accidentally made available for pre-load back in June, and since then people have been sniffing through the game’s files. Of course, some surprises were found.

A lot of new images were dumped on Imgur recently, which give lots of insight into what’s in store for the game. The big one was a Halo-themed event that lets players drive the famous warthog. While this has been done before in the series, it’s worth noting that Master Chief himself appears in the vehicle, with a covenant ship and the Halo ring in the background. It looks like this one may be more in-depth than what came before.

The developer of the game recently revealed lots of new information on the game, which is broken down below.

Seasons Change Everything – Forza Horizon 4 features dynamic seasons that change gameplay, unlocking new events and routes, impacting driving conditions, and transforming open-world exploration – all in native 4K and HDR. Players will be able to master driving in dry, wet, muddy, snowy and icy conditions in a shared world where everyone experiences changes in time of day, weather and seasons together.

Open-World Freedom – Forza Horizon 4 allows players to choose their path to becoming a Horizon Superstar. We’re proud to introduce two of our most fan-requested features – a brand new Route Creator that lets you design and share your own custom race routes anywhere in the open world and the option to play at 60 frames per second for players on Xbox One X.

Collect Over 450 Cars and Customize Your Horizon Life – With over 450 cars from more than 100 licensed manufacturers, Forza Horizon 4 features the largest and most diverse Horizon car roster yet with all the customization options Forza players love. And for the first time in the Horizon series, players can own property that unlocks new items and gameplay perks.

Go it Alone or Team Up – Players can choose to play alone, cooperatively or join multiplayer for casual fun or ranked teams. In addition, integrated Mixer broadcasting and spectating features add to an already fun and rewarding experience.

Forza Horizon 4 will launch for Xbox One and PC on October 2nd.