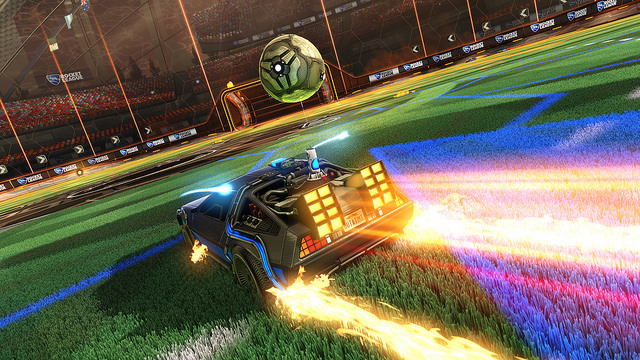 A few days ago it’s been confirmed that Rocket League, the excellent game developed by Psyonix now available in all regions on PlayStation 4 and PC, is going to receive unique extra content in around one week. The new Rocket League content will be the DeLorean Time Machine from the Back to the Future movies, a vehicle that will come with some unique features that will surely make all fans of the classic movies quite happy.

Yesterday new Rocket League DLC packs have been released for the game. The new DLC pack is called the Revenge of the Battle-Cars DLC pack and it’s now available for purchase for both the PlayStation 4 and PC versions of the game.

A few weeks ago it’s been revealed that Rocket League might be released on other formats in the future. We haven’t heard much about these other versions of the game but it looks like something is moving, as the game title on PlayStation 4 now shows a “Cross Buy Later”, meaning that the game could be released on PlayStation 3 or PlayStation Vita or both soon.

Rocket League is now available in all regions on PlayStation 4 and PC. We will keep you updated on the game’s future DLC packs and updates as soon as more comes in on them so stay tuned for all the latest news.