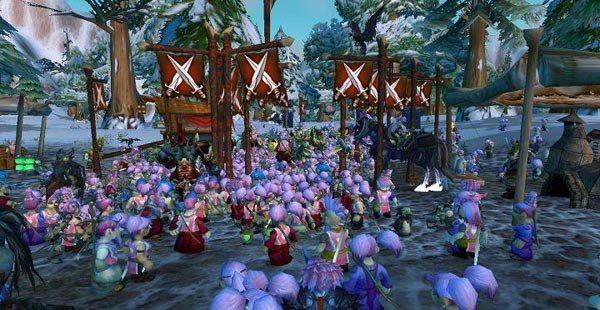 It’s a bizarre and humorous tradition for a good cause. World of Warcraft’s Running of the Gnomes calls upon gamers to create level one gnome characters and make a dangerous expedition to support charity. While this was previously just a community run event, Blizzard has come out and supported Running of the Gnomes with a fun (and official) event.

Gnomes start in New Tinkertown, run to Ironforge, and progress to Stormwind via the Deeprun Tram. The rag-tag group of gnomes then makes their way south through Stranglethorn Vale, eventually ending their journey (with many deaths along the way) at Booty Bay.

Running of the Gnomes supports Cleveland Clinic’s Tuohy Vaccine, and the accompanying Running of the Trolls event supports the Trevor Project, an important 24 hour suicide hotline for LGBT Youth.

As mentioned above, Blizzard has officially supported Running of the Gnomes by including an achievement for running through 40 gates and crossing the finish line. Accompanying the race will be accompanying decorations and other regalia befitting the epic trek of World of Warcraft’s gnomes.

In an interview with PVP Live, the event’s founder Dravvie expressed her appreciation and shock and how big the event as grown.

“Some people donate what they want to the run, but some people pledge to donate a certain amount per person who shows up. When we first started out, we pledged to donate ‘small change’ as a joke about Gnomes, where people would say that they’d donate a penny/nickle/dime/quarter per gnome that was there. Some still do! That’s why you see odd donation numbers sometimes!…I feel really honored that that this small, fun charity event that I started years ago with some friends has turned into such an installation in the community that Blizzard saw fit to make it a holiday. It’s neat to think that so many people that wouldn’t have otherwise known about the event will get to experience it! Looking at the PTR, they didn’t even change the route. I’m so touched to know that the staff at Blizzard have come to love the event like I and the community do. Honestly, I just feel humbled and grateful.”

World of Warcraft’s Running of the Gnomes has grown from an initial population of 144 gnomes to over 2,860 gnomes last year. This number is only guaranteed to grow as Blizzard gives the event official support and a significant cosmetic update.

Will you guys be running a gnome for a good cause? Sound off in the comments below!