Overwatch ‘Masquerade’ Comic Shows What Talon’s Been Up To, Teases New Skins 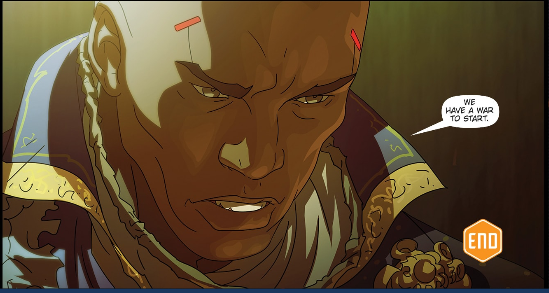 Overwatch ‘Masquerade’ Comic Shows What Talon’s Been Up To, Teases New Skins

It’s been awhile since the Overwatch creative team gave us a look at the plans of Talon. The last bit we saw was the botched Volskaya job, and the newest comic, Masquerade, picks up soon after. Doomfist has escaped prison and gets himself caught up on recent events with Reaper.

The comic’s story is fairly simple: Doomfist heads to Monaco with Widowmaker and Sombra to meet with an Omnic in a casino. The Omnic, Maximilien, is an influential member of Talon and reminds Doomfist a lot of people were happy to see him imprisoned. One of those people, Vialli (who ordered the assassination of Katya Volskaya) sends men to kill Doomfist. Easily defeating Vialli’s cronies, they head to Venice. Donning traditional masquerade clothing (which looks certifiably badass), Widowmaker, Reaper, and Sombra clear out Vialli’s hideout while Doomifst confronts him on the roof. Obviously, Vialli gets thrown off.

While not much happened story-wise, we did get a bunch of little background information on the inner workings of Talon. As we found out in the Doomfist reveal, Talon is lead by a sort of roundtable committee. Four of those leaders, we know now, are Doomfist, Reaper, Vialli, and Maximilien. Looking at one of the last panels, it seems like there are six other leaders, making nine in total (now that Vialii is dead):

The roundtable was apparently divided, as Doomfist disagreed with Vialli’s call to assassinate Volskaya, leading him to commend Sombra for her “ambition.” We find out that Sombra’s new secret friend in Katya isn’t so secret, as Reaper has been keeping tabs on her.

The main difference between Vialli and Doomfist is money, Vialli using Talon to create a profit, Doomfist to create a stronger world (according to Jeff Kaplan). Volskaya was in the way of their profits, but “she’ll keep the fight going,” leading the world deeper into war. The confrontation between Vialli and Doomfist leads to a wildly interesting line: “We aren’t criminals, satisfied by wealth and power. We know better.” Doomfist may have a warped idea of ‘better,’ but he now seems firmly in control of Talon, and he’s ready to start a war.

Aside from the story, the skins teased were awesome. Each Talon operative got their own Masquerade skin, Doomfist in royal purple and yellow and reaper in flowing reds and skull faced:

We got a peek of Widowmaker’s skin on the cover, which looks similar to her ‘Odile’ and ‘Odette’ skins: 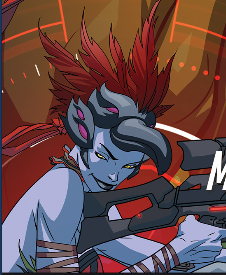 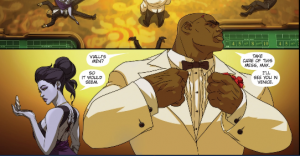 The Doomfist patch is live in all regions next Thursday, so we’ll have to wait until then to see what skins we’ll be getting. Check out the newest comic, Masquerade (and catch up on the others), here!