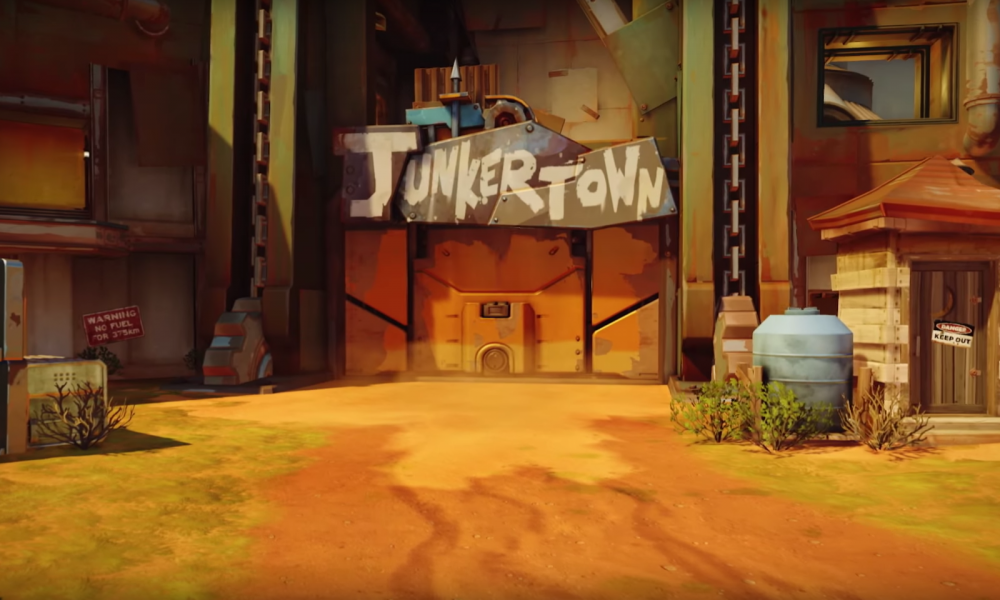 Welcome to the apocalypse. Welcome to Junkertown. Blizzard revealed a brand new Overwatch map today at Gamescom, the post-apocalyptic home of Junkrat and Roadhog: Junkertown. An announcement video was released alongside a new cinematic starring the crime duo.

In the cinematic, the two are kicked out after stealing from the queen, blowing up her house, and “the beat down at the bar.” Following a Cowboy Bebop-style opening, Junkrat hatches a plan to win back the Queen’s good graces with a “glorious blinged-out boom trolley” filled with treasure from their worldwide crime spree.

This is how the map will function as well: it is an Escort map, so the payload is located right outside the attacking team’s spawnroom. The trolley is escorted up to the gate of Junkertown for point A, taken through the streets of the Borderlands-esque town to get to point B, then to the Queen’s throne room to finish the map at point C. The second point seems to go through what the Queen describes as “The Scrapyard,” where the Junkers “blow off steam in…a massive gladiatorial arena whose combatants fight for glory, riches…and to survive.” This section features a few interesting high-ground and low-ground options, like a rotating platform above the cart for defenders to set up on, or underground gold stashes and pits of broken Omnics where players can cut through for flanks.

Design-wise, it doesn’t seem all that much different than Watchpoint: Gibraltar, Dorado, or Route 66. However, the map should provide a lot of interesting information when it comes to lore. What’s known about the map as of right now is it’s located in the remains of the destroyed “Omnium” which functioned as a sort of reservation for Omnics. Located in the Australian Outback, those that lived there did not like to see their home taken from them, so they fought back against the Omnics and turned the Outback into the irradiated wasteland it is now. The survivors of that war now live in Junkertown as the Junkers, under their Queen.

There is currently no date set for the release of the map, although it is sure to be live on the PTR within the next week.