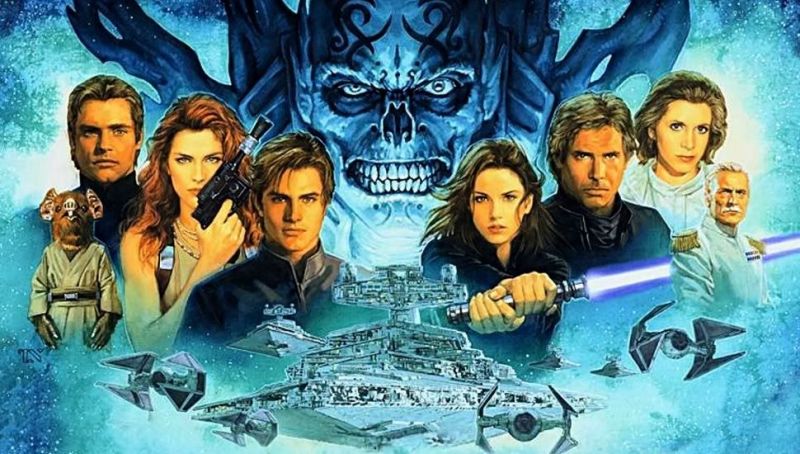 What happens when a popular television show or movie franchise ends or when production takes longer than expected and leaves fans with an entertainment drought? What about when a movie or show hints at a past event that is not adequately explained in the main story? Extended universe novels, comics, and video games pick up the slack and fill in the gaps. These oft-overlooked novels, comics, and games can be downright necessary for fans of several pop-culture phenomena, and here’s a few reasons why.

Ok, this reason is pretty obvious, but it’s primarily why most of these novels, comics, and video games exist. While Star Wars fans will always treasure the movies (sans Episodes I-III, of course) and their stories, characters, and locations, the films take place in a galaxy far, far away, and galaxies contain uncountable worlds, most of which can’t be explored in 2-3 hour-long motion pictures. However, Star Wars expanded universe novels, comic books, and games tell their own stories and are free to explore these distant planets as they see fit. Korriban, the homeworld of the Sith Order, is one of these planets. In the films, the existence of the Sith Lords Darth Vader and Emperor Palpatine is taken as a matter of fact, a necessary Yin to Jedi Knights Obi-Wan Kenobi, Yoda, and Luke Skywalker’s Yang — and Korriban isn’t even mentioned. However, plenty of the expanded universe novels, as well as comic books and video games, explore this blasted wasteland of a planet and delve into its dark and terrible secrets. If it weren’t for these stories, Star Wars fans would never have learned that the Sith Order got its start from evil, exiled Jedis who landed on Korriban and conquered its native, red-skinned inhabitants, the Sith race. Similar novels, comics, and games expand on the giant skeleton on Tatooine in Episode IV and give it an ecology and a name — the Krayt Dragon. And don’t even get me started on Admiral Thrawn and his on-again, off-again relationship with canonicity. Of course, not every expanded universe novel, comic , or video game follows the protagonists of the source material, but if they’re well received by fans, they don’t need to.

Sometimes, a story leaves a few questions unanswered, which can be good or bad depending on the story’s quality. In the case of Five Nights at Freddy’s, it’s most certainly good, as these unanswered questions send fans into a tizzy as they search high and low for any sort of clue or answer. Some of Matthew Patrick’s (aka MatPat, aka The Game Theorists) most popular videos revolve around him trying to answer questions left in the Five Nights at Freddy’s games, such as the identity of Purple Guy, the main-antagonist of the franchise, and whether or not the animatronics are possessed, malfunctioning, or killing as intended. Often, the answers are (possibly) hidden in the games, usually in locations players ignore or glance over as they frantically avoid death at the hands of Freddy Fazbear and his menagerie of murderous mechanical muppets, but creator Scott Cawthon intentionally hides several answers in the expanded universe/tie-in novels, The Silver Eyes and The Twisted Ones. However, Cawthon is nothing if not crafty and makes sure the novels raise even more questions — the answers that I dare not mention. Given Cawthon’s penchant for mysteries and cryptic clues, he will definitely hide answers to questions raised by the novels in FNAF 6 (because of course it isn’t cancelled), which will provide even more mysteries that will be answered in an upcoming book or movie.

Continue Where The Plot Left Off

It is a fact of life that every television show, no matter how popular, eventually ends, but that doesn’t necessarily mean the end of the franchise. Occasionally, an expanded universe novel, comic book, or video game picks up after the series finale, and while some of these books and games are of questionable canonicity, others are readily recognized as canon by fans, especially books and comics written by the original show creators. For example, back in 2007, Dark Horse started publishing Buffy the Vampire Slayer comics written by show creator Joss Whedon and other show writers. These comics continue the Buffy the Vampire Slayer story and are recognized by fans as the official eighth, ninth, and tenth seasons of the series. Not only do these these comics help keep the franchise alive, but they also explore stories the original Buffy The Vampire Slayer show never could. Examples of these stories include Buffy’s not-quite sister Dawn transforming into a giant and fighting a Mechagodzilla-esque robot and Buffy dreaming about living in a cartoon that, in a bit of meta-humor, is a reference to the failed pilot episode of Buffy The Animated Series. While all shows, movies, and video games must eventually end, comics, if they’re successful, can potentially run indefinitely, which allows fans to live out their dreams of continuing to follow their favorite characters from their favorite franchises ad infinitum.