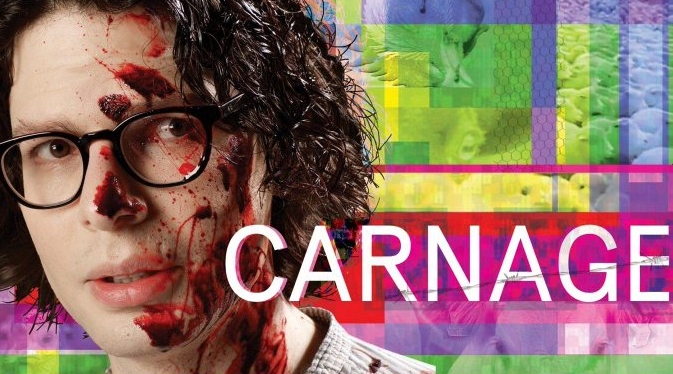 “Carnage: Swallowing the Past” is a fresh made documentary film directed by English comedian Simon Amstell. It presents a world in the very near future in which the act of animal slaughter has become animal abuse and is no longer practiced. This means that eating and wearing, or otherwise using animals for our own benefit is totally out of the question. In this strange world having eggs for breakfast is considered barbaric and backwards. It is a world in which animals have been emancipated, and in which Carnism is placed next to slavery and genocide on the “Don’t do” list.

As a faux historic documentary, Carnage takes an interesting approach. It focuses on how would former meat eaters feel about their past sins. The senior members of society are the last ones who have actually eaten and wore animal products. Consequently, the effort to reconcile with their dark past is taking a huge toll on their emotional well being. Watching them can be rather amusing to us people from the past. This unless we take the film too seriously and become affected by a projected culture shock, which might have been Amstell’s intention. However, the comedic undertone of Carnage presents Veganism in a more palatable fashion than, say… Earthlings does.

The other part of the film focuses on the history of Veganism, going from actual history into a speculative vision of the future. This is done through a collage of news, talk shows and commentary which are portrayed rather realistically (except for when they’re intentionally funny). What’s interesting is that some of them are not exactly acted. There are quite a few scenes which are real, but are mixed in with the others so well that’s it’s actually difficult to tell them apart. The film uses this trick to ground its ideas in reality, even though the “current year” is supposed to be 2067 AD. Of course, the people and characters portrayed in Carnage are not so uncommon these days. There is a growing population who have embraced the ethos of Veganism . To put it short, meat is murder. Realistically if this trend continues, our present society might be judged harshly in fifty years time.

I guess this throws back a lot to Critical Theory, which is the way of reassessing history based on current standards of morality. Critical Theory was developed by the Frankfurt School back in the early nineteen thirties and it was based on the works of famous thinkers such as Karl Marx and Sigmund Freud. I’m not saying that Veganism is Marxism, but the way in which Carnage depicts history, certainly reminded me of this. I’m not that surprised, really. The egalitarian principle upon which “Ethical Veganism” stands, hits rather close to the equality idea found in Marxism. Of course one might say that going from human equality to animal equality is a big stretch of an argument. But putting political ideology aside, why wouldn’t a civilized society have a deep respect for animals?

If universal love and compassion are worthy ideals, then shouldn’t animals be entitled to both? Does the lack of higher brain functions justify being regarded as a resource, and thus being exploitable? If that’s so, then maybe we should think differently about some members of our own species. After all, calling someone “a pig” is not unheard of.

But finally, what does Carnage have to do with Alzheimer’s? Not a lot, really. It’s just that a short scene caught my attention:

A middle aged man (played by Martin Freeman) is having dinner with his mom. When this respectable lady is presented with the choice of chicken meat for dinner, she reacts as if she’s just been served the family dog. That’s fairly understandable for someone who forgot the general relationship between man and animal; more specifically the relationship between consumer and poultry. So I wonder, is this scene meant to be funny or sad? Of course, Alzheimer’s is not a laughing matter. But put in context, the meaning changes completely: The woman needed the help of a degenerative mental condition to realize what most sane people cannot.

So, will be on the right side of history? ⁽(◍˃̵͈̑ᴗ˂̵͈̑)⁽