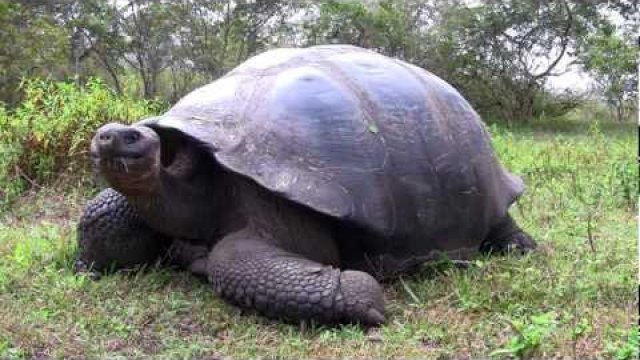 The Galapagos islands are home to a wide variety of unique species such as the marine iguana, lava lizard, and Galapagos giant tortoise. The latter is of particular interest to many biologists because of its huge size and long lifespan. Famous naturalist Charles Darwin himself was also fascinated by them when he closely studied the species back in 1835. Unfortunately the Galapagos tortoise has been on the endangered species list for a long time and by the 1960s only 15 of them remained in the wild. But now thanks to massive efforts by conservationists, the tortoises are making a comeback and their population has grown to over 1,000 according to a recent study.

This means that the Galapagos tortoises are now able to breed and sustain themselves without help from humans. “We saved a species from the brink of extinction and now can step back out of the process. The tortoises can care for themselves,” said James Gibbs, vertebrate conservation biology professor at the State University of New York (SUNY) College of Environmental Science and Forestry. However, he adds that while the Galapagos tortoises have a much better chance of survival now, their future is uncertain for the most part. The ecosystem they rely on to survive is still damaged by feral goats that were brought to the island on ships in the 19th century.

Aside from humans, the goats where the other main reason that lead to the population decline because they ravaged all the vegetation needed by the reptiles to survive. Luckily humans started removing the goats in the 1970s and managed to get rid of the last of them in the 1990s. Now that the Galapagos tortoises can finally live and breed in peace, the island’s ecosystem has already started to recover bit by bit thanks to the tortoises who are helping to spread the seeds of the plants they’re eating. The giant Galapagos tortoise is true to its name as it measures no less that 3 feet (1 meter) on average and can live up to 200 years.

Entomologist discovers new species of tarantula and names it after John Lennon
Bears, wolves, and other large predators are making a comeback across Europe