Millions tricked into thinking chocolate was a ‘weight loss accelerator’ 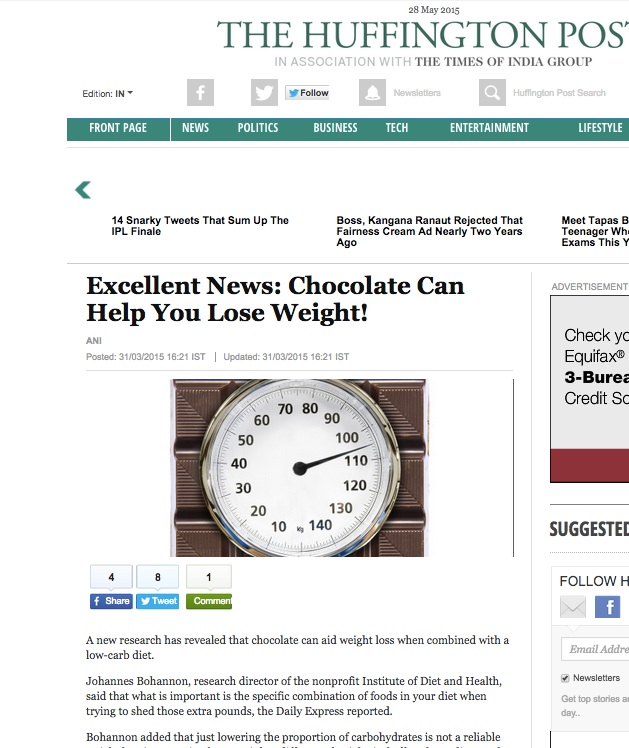 Millions tricked into thinking chocolate was a ‘weight loss accelerator’

Science journalist John Bohannon Ph.D., while working for a German documentary on dietary junk-science, helped concoct and publish a bogus study that said chocolate can ‘accelerate’ weight loss. The study was orchestrated by The Institute of Diet and Health, a website that Bohannon and his colleagues nefariously created only months before the dubious study. This social experiment was conducted to shed light on how the media can be fooled into publicizing junk science.

The study, titled ‘Chocolate with high cocoa content as a weight loss accelerator,’ was published in the International Archives of Medicine, a journal known for irreputable practices. Regardless of the journal’s bad reputation, reporters across the world jumped on the story and published it with little to no fact checking.

Outlets that picked up the story included Daily Mail, The Huffington Post, Cosmopolitan’s German site, The Times of India and the front page of Bild — the widest circulated tabloid in Europe. Stories on nutrition, especially weight loss, are a sensational form of science journalism to readers, so it’s unsurprising the study was eagerly accepted.

The study was indeed conducted by a German scientist and Bohannon, but there were serious flaws in the weight loss research that would be obvious to any scientist.

The sample sizes were all less than thirty individuals, which makes any health research unreliable. Also, an incredible amount of biological data (weight, sodium, cholesterol, and blood protein) was followed that’s bound to fluctuate in such a small group of individuals.

Bohannon then enlisted the help of a financial statistician who fabricated statistical significance by modifying P-values in his calculations. The fudged data was then packaged into a research paper, married to a phony press release, and readily accepted by reporters.

A journalist who actually read the paper could have (hopefully) noticed these glaring issues, or at least thought to tap a scientist for comment.

Bohannon has exposed issues in science publications before. On assignment for the journal Science, he pointed out nearly half of his flawed papers were accepted by supposedly peer-reviewed journals. Because science publications can’t always be trusted, journalists need to be conscious of the looming threat of junk science.