Fingerprints that glow under black light 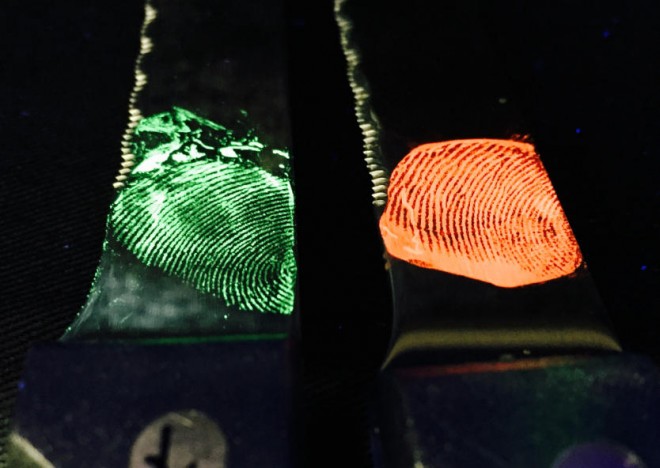 Fingerprints that glow under black light

A new method is changing the way of forensics practice, which has the potential to get past the old methods of forensics and it was discovered due to a home burglary. Dr. Kang Liang is an Australian scientist whose house was robbed and while the police dusted the crime scene he started to question if there was a more effective way to survey such a scene. This incident led Dr. Kang Liang to an answer that might change the way we see crime scenes in the future: Fingerprints that glow.

Dr. Kang and a team of scientists from Australia’s CSIRO research facility developed a liquid that contains metal organic framework (MOF) that can bind the residue left behind by a fingerprint and can be applied to a nonporous surface. In less than 30 seconds after applying black light the liquid will reveal glowing green fingerprints.

The liquid MOF fingerprint residue that is left behind includes fatty acids, proteins, salts and peptides. The glow color can also be changed by altering chemicals inside the solution. After making this breakthrough in the world of science, Liang said that his new method was quicker and could be used in places where ‘dusting’ is not appropriate.

“Knowing that dusting has been around for a long time, I was inspired to see how new innovative materials could be applied to create even better results,” Dr. Kang Liang said.

Now the team is hoping to make law enforcement agencies use this idea in the field and by all means, it would make the whole fingerprinting process faster and more efficient.