Ooho: The Biodegradable Water Bottle of the Future with the Weird Name 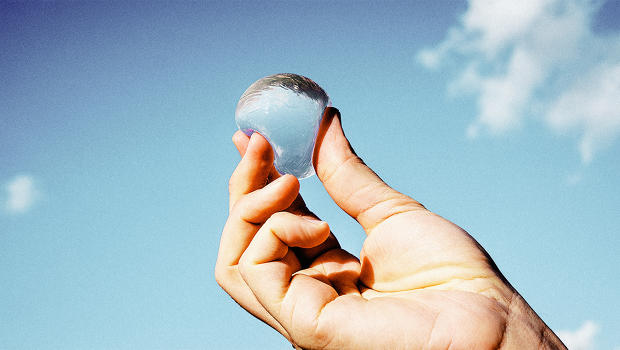 Ooho: The Biodegradable Water Bottle of the Future with the Weird Name

Have you ever wanted to eat your water bottle? No?  Well soon you can thanks to Ooho. Yes, I am aware of how weird that pitch sounds, but please keep in mind I never said it was a plastic water bottle. The Ooho is meant to be edible.

So, what is the Ooho? It might just be part of the solution to our pollution problem, at least the problem caused by throwing out plastic water bottles. Oohos are completely organic gelatinous packaging made out of seaweed. They looks like big spheres of water you can pop in your mouth, which is something you actually can do. Of course, you can always just tear a hole in the Ooho’s top, drink out of it like a small spherical waterskin, and compost the rest.

The main draw of the Ooho is that it is less expensive to make than plastic, and I don’t just mean in terms of money. According to Skipping Rocks Lab, based at the Imperial College London, Ooho’s production creates 5x less carbon dioxide and requires 9x less energy than standard plastic water bottles. Granted, Oohos are much smaller, but the math still holds up even when you take into account the size difference. Plus, Oohos break down in four to six weeks, which is great for our landfills — but don’t try to store them in your pantry.

Skipping Rocks Lab has been developing Ooho for the past several years and recently started a crowdfunding campaign to increase production. With luck, the Ooho might replace the water bottle in the near future, as well as the Coca Cola bottle, the Sprite bottle, the Gatorade bottle, and even the beer bottle.