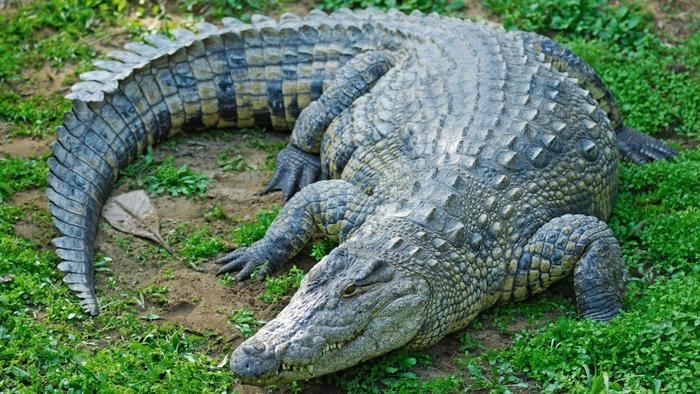 Meet the Teleocrater rhadinus, or Teleocrater for short. He looks like a cross between a Komodo Dragon and a Velociraptor, or at least how a Velociraptor is portrayed in the Jurassic Park films. He’s an archosaur, a group that at some point divided into the crocodilian and the bird/dinosaur evolutionary trees. However, Teleocrater predates them.

The first Teleocrater fossils were unearthed in the 1930s, but paleontologists only recently discovered that because his ankles were flexible, dinosaurs and crocodiles may have been more closely related than we thought. That realization, in turn, sheds light on a possible new understanding of how dinosaurs, and by extension, birds evolved.

OK, so why are Teleocrater’s ankles so important? Well, archosaurs have two types of ankles: flexible and fused. Crocodilians have ankle bones that rotate against one another, which makes their ankles flexible and allow them to either sprawl or walk erect. Birds and dinosaurs, on the other hand, have ankle bones that are stuck together, or fused for lack of a better term, which restricts them to walking erect. According to a study on Teleocrater fossils recently excavated in Tanzania and published in Nature by scientists from numerous universities, this species has flexible ankles, like crocodilians, despite being a member of the bird/dinosaur branch of archosaurs. Yes, something as seemingly insignificant as ankle bones are enough to make scientists reevaluate their dinosaur evolution model.

Originally, scientists thought that these flexible ankles (referred to as “‘crocodile-normal’ ankles” in the article) evolved after archosaurs split into the crocodilian and bird/dinosaur evolutionary branches. However, the Teleocrater’s ankle fossils imply that flexible ankles may have actually been a common feature of all archosaurs up to a certain point prior to dinosaurs. In other words, instead of flexible ankles evolving solely within the crocodilian evolutionary branch, they instead predated both crocodilians and birds/dinosaurs and were later replaced by fused ankles in the bird/dinosaur evolutionary branch. According to co-author Kenneth Angielczyk, this discovery could potentially “[rewrite] our understanding of the very earliest history of the bird and dinosaur lineage.”

The Teleocrater’s ankles are yet another example of why paleontology is such a fascinating field. The first Teleocrater was discovered in the 1930s, yet after excavating a new set of Teleocrater fossils in 2015, scientists are now rethinking the current model of dinosaur evolution, all thanks to tiny ankle bones. Who knows what else paleontologists will discover in the future. Perhaps we will soon find the first archosaur that split into the crocodilian or bird/dinosaur branches. One can only hope.

Aaron GreenbaumApril 7, 2017
Read More
Ocean Worlds could harbor life in our own solar system, according to NASA
The PneuMobility Wheelchair Is a Breath of Fresh (Pressurized) Air