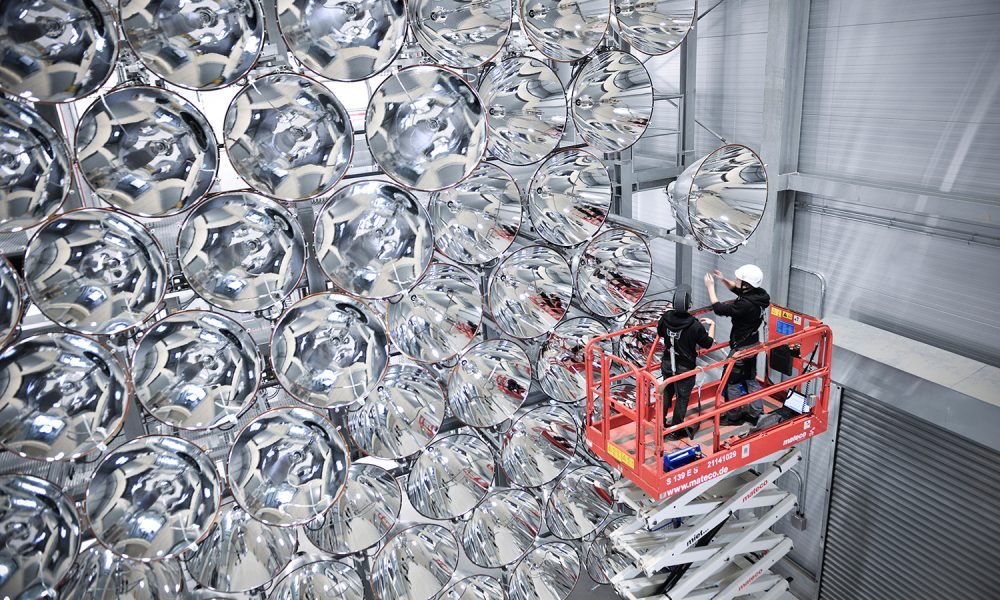 In Juelich, Germany scientists from the German Aerospace Center have put together a collection of 149 xenon short-arc lamps within a protective radiation chamber. These lamps form the world’s largest artificial sun. The structure itself is 45 feet by 52 feet. The artificial sun, which is called Synlight, can focus light that is 10,000 times more intense than the sunlight the Earth receives onto an 8 inch by 8 inch area. Due to all of these lights the temperature gets as hot as 6,332 degrees Fahrenheit. Bernard Hoffschmidt, one of the researchers said this to The Guardian ““If you went in the room when it was switched on, you’d burn directly.” If you were wondering why Synlight is in a radiation chamber, there’s your answer.

When used at launch Synlight was focused onto sheet metal at the previously mentioned size of 8 inches by 8 inches. The purpose of focusing this much light at a single point is simple: they’re trying to generate hydrogen. When hydrogen is burned it doesn’t produce carbon emissions, so it could possibly be used as environmentally friendly fuel. The current method of obtaining hydrogen is the electrolysis of water. Water is two parts hydrogen and one part oxygen. When you pass an electric current of at least 1.23 volts through water it separates the water molecules into O2 (oxygen) and H2 (hydrogen gas). Synlight creates hydrogen by heating a metal sheet that is then sprayed with water vapor. The sheet reacts with the oxygen leaving the hydrogen behind.

Synlight does in fact produce hydrogen, but it takes a large amount of energy to do so. After running for four hours Synlight will have used enough energy to power an average household for a whole year. This lessens the utility of Synlight greatly, so the hope is that solar energy can be used in the future. Synlight currently has it’s faults now, but it also has a lot of promise and potential.

Samantha JacksMay 2, 2017
Read More
Europa may be our best chance to find alien life
Get night vision with this weird injection from biohackers