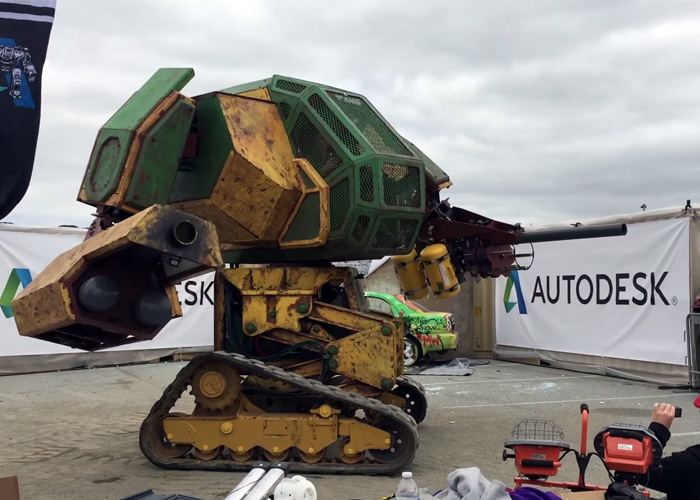 Pacific Rim has some very cool giant mechs that most of us would just love to be able to pilot, or at least watch as they fight something equally big. Now, as far as I can tell there are no Kaiju on Earth just yet, but there are a few huge robots just waiting to see some action and since there are no aliens to fight the next reasonable option would be to fight among themselves. Just recently, the folks over at MegaBots released a video in which they showcase their Pacific Rim like “Mark II” giant mech, which also happens to have giant paintball guns that can bend a car.

MegaBots Inc. is a company that plans to create a new type of sport which involves 15-foot robots fighting each other for our amusement. Ok, so at 15 feet these mechs wouldn’t be as big as those found in Pacific Rim, but they’re definitely still impressive. Perhaps it would be more accurate to compare them to those found in Titanfall? In any case, the big news isn’t that there’s a giant robot roaming around, but that MegaBots want to see their creation fighting an equal opponent. In the aforementioned video, the US team challenged the Japanese Kuratas robot built by Suidobashi Heavy Industry a while back. Standing in at 12-feet tall the Kuratas is a bit smaller than the Mark II, however, this machine was designed as a combat mech and comes equipped with some very advanced electronics so it’s definitely not to be trifled with.

At the moment most people seem to be putting their money on Japan, and who can blame them? They pretty much invented the whole idea of giant combat mechs. However, the Mark II looks pretty solid in its own right so let’s not dismiss it just yet. The MegaBots team said that both mechs would need some modifications before the duel can happen, but that shouldn’t be too much of a problem because there’s plenty of time to upgrade these bots. Provided that Japan actually accepts the challenge, their Kuratas will go up against the US Mark II in one year from now, with Suidobashi Heavy Industry having the privilege of choosing the battleground.