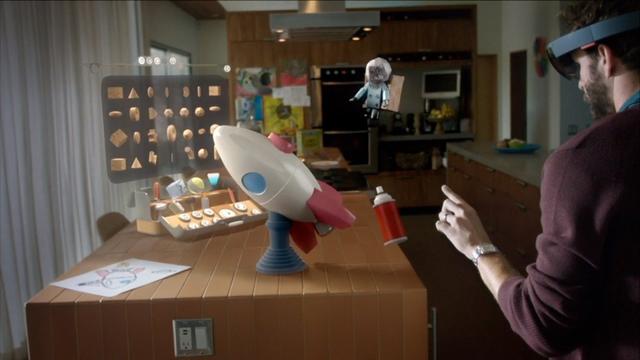 It’s pretty sad that even people in space get to check out Microsoft’s HoloLens before we do, and yet, that’s exactly what’s going to happen a bit later this week. The occasion? Why, NASA has partnered with aerospace manufacturer Orbital ATK for a new resupply mission to the ISS and it seems like a pair of HoloLens devices will be among the items that are being sent to the space station. This is the fourth such mission for Orbital ATK, the company that had to replace SpaceX after Elon Musk and co. failed to complete a similar venture to the ISS back in June.

Needless to say, the mission is about much more than just delivering a couple of augmented reality devices to space, as Orbital ATK CRS-4 will ship supplies and other cargo that are essential to the astronauts and the station. Having said that, the HoloLens is not just new toy for astronauts to play with either and may actually prove very useful to them in the long run. By using Microsoft’s augmented reality technology, the crew aboard the ISS can communicate with those on the ground in new and exciting ways.

Entitled Project Sidekick, this is Microsoft’s attempt at making things easier for everyone by allowing ground operators to see in real time through the eyes of the astronauts while they chat on Skype. According to NASA’s Jeff Norris, “it is operationally significant to see an astronaut’s perspective as they work.” He also adds that “historically this is not a perspective that’s been easy to get until now.” This new way of working together is being called Remote Expert Mode and is one of two modes provided by Microsoft’s HoloLens.

The second one, Procedure Mode, is yet another helpful tool that brings augmented reality straight to the ISS and aids the astronauts with holograms that can be seen only by the wearer of the HoloLens. These holograms are the equivalent of illustrated tips and instructions that essentially make manuals and tablets pretty much obsolete. Why look for instructions on a tablet when you can have everything you need right in front of your eyes?

As mentioned earlier, SpaceX was supposed to carry the HoloLens devices to the ISS earlier this year, but since that mission ended up failing, it’s now up to Orbital ATK to get the job done. The new mission is scheduled to commence this Thursday at 5:55 p.m. EST from Space Launch Complex 41 in Cape Canaveral, Florida.