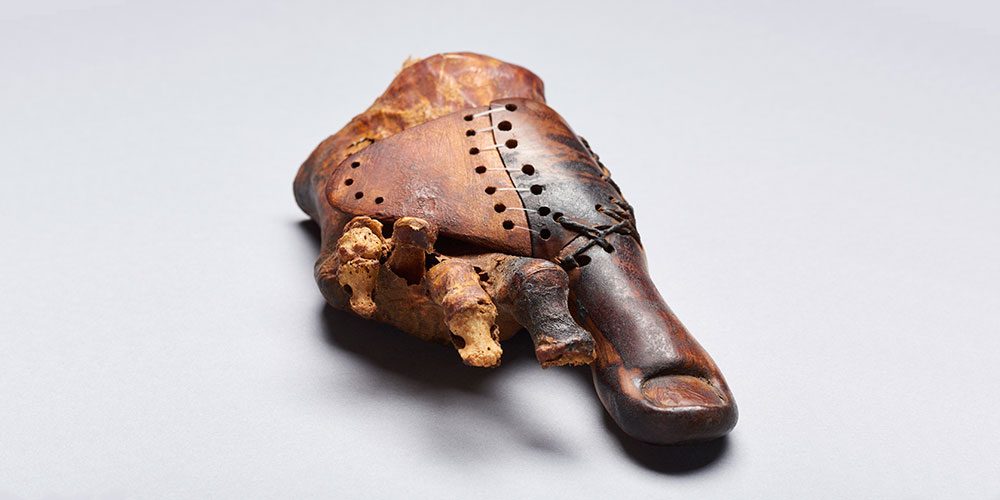 Sometimes, it’s hard to appreciate how far technology has progressed, especially prosthesis technology. Scientists can now create prosthetics that are controlled by nerve impulses and might soon be able to develop devices that can simulate the sensation of touch. But let’s step back a bit and examine at the origins of prosthetics, mostly because archaeologists have finally found what they think is the world’s first prosthetic.

Recently, Egyptologists from the University of Basel, Switzerland, as well as researchers from the Egyptian Museum in Cairo and the Institute of Evolutionary Medicine at the University of Zurich, examined an artificial wooden toe found on the mummified foot of a woman buried in the necropolis of Shiekh ‘Abd el-Qurna. The archaeologists used modern microscopy, X-ray technology, and computer tomography and were able to determine how the prosthetic was made. Furthermore, not only did the researchers determine that the toe is one of the oldest prosthetics to date — around 3000 years old — but they also believe that the person who created it was “very familiar with the human physiognomy.” Apparently, the wooden toe belonged to a priest’s daughter and, according to the team, “The fact that the prosthesis was made in such a laborious and meticulous manner indicated that [the woman] valued the natural look, aesthetics and wearing comfort and that she was able to count on highly qualified specialists to provide this.”

The prosthetic is fairly simple by today’s standards and is merely a single toe connected to panels via straps, but keep in mind  the prosthetic is from the “early first Millennium BC.” The artisan had to measure the woman’s foot, carve a piece of wood, fit it, and hope it worked, something that researchers say wasn’t always the case since the toe was apparently refitted several times. Although, the press release is unclear if this is due to a mistake on the creator’s part or if the woman merely outgrew the prosthesis, but regardless of the refitting, the prosthetic is a testament to the skill of ancient Egyptian prosthetists, as well as how far prosthetic technology has progressed. The woman probably only could have afforded the prosthetic due to her family’s wealth (ancient Egyptian priests were extremely high on the social status ladder, second only to the pharaoh), but most people today  can afford vastly superior prosthetics. Who knows how much prosthetics will advance, and become affordable, in another 3000 years.