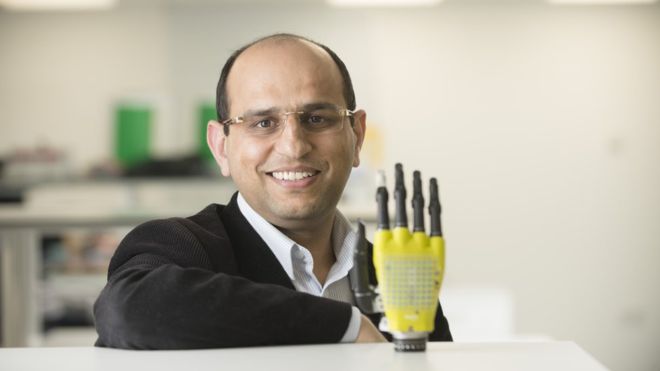 Scientists have long dreamed of prosthetics that can feel objects they touch. Few have come closer to realizing this dream more than The University of Glasgow, thanks to newly invented “synthetic skin.”

The University of Glasgow’s Bendable Electronics and Sensing Technologies (BEST) group, led by Dr. Ravinder Dahiya, recently developed a new synthetic skin made out of graphene, a flexible form of graphite that, despite only being an atom thick, is stronger than steel. According to Dr. Ravinder, BEST has made great strides in creating prosthetics that use this synthetic skin,

“My colleagues and I have already made significant steps in creating prosthetic prototypes which integrate synthetic skin and are capable of making very sensitive pressure measurements. Those measurements mean the prosthetic hand is capable of performing challenging tasks like properly gripping soft materials, which other prosthetics can struggle with.”

Furthermore, the skin may have applications in robotics, as, according to Dr. Ravinder, “a robot working on a construction line, for example, is much less likely to accidentally injure a human if it can feel that a person has unexpectedly entered their area of movement and stop before an injury can occur.”

One might wonder what powers the synthetic skin, and the answer is the skin itself. Sadly, the skin is not a perpetual motion device, but since graphene is transparent and electrically conductive, tiny photovoltaic cells can be built into the synthetic skin, gather sunlight, and convert it into electricity, not unlike solar panels. The skin requires 20 nanowatts of power per square centimeter, but as far as electricity needs go, that is literally chump change; even the worst photovoltaic cells are more than capable of meeting these meager requirements.

One drawback to the synthetic skin is it cannot store electricity, but Dr. Dahiya has already taken this into consideration and is currently researching ways to store unused energy in batteries. Furthermore, Dr. Dahiya plans to, as he puts it, “further develop the power-generation technology which underpins this research and use it to power the motors which drive the prosthetic hand itself.” In other words, he wants to create an “entirely energy-autonomous prosthetic limb.” Perhaps this technology could also create energy-autonomous robots as well, with luck ones that don’t try to overthrow humanity in a robot revolution.

People who are interested in learning more about Dr. Dahiya’s synthetic skin can read his team’s paper, “Energy Autonomous Flexible and Transparent Tactile Skin,” published in Advanced Functional Materials. Sadly, as of writing this article, you cannot read the paper for free online.