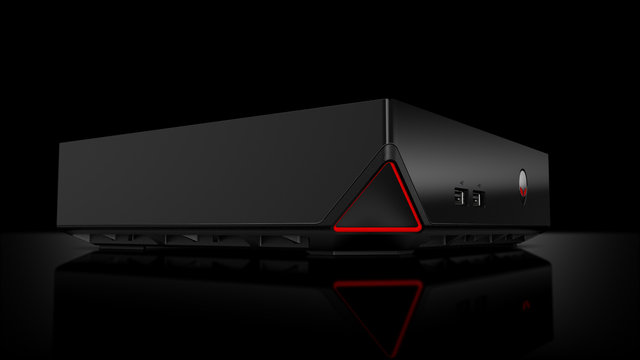 For those of you who remember the Alienware Alpha from E3 2014, know that it’s now available to pre-order from Amazon if you’re willing to fork out $550. Granted, it’s entirely possible that not everyone knows about this device as it kinda fell under the radar due to all of the other important announcements made at the event. If that’s the case, don’t worry because I’ll go ahead and talk a bit about it just to get you up to speed with what this machine is all about. The Alienware Alpha essentially takes a PC and combines it with a console in order to offer users a brand new way of playing video games. The device was initially meant to run on the Steam OS and use the Steam Controller, but since the latter was delayed there has been a slight change of plans.

Instead of the said controller, the machine will use a wireless Xbox 360 gamepad, for the time being at least. As far as the operating system is concerned, the company ultimately decided to have the Alienware Alpha run on Windows 8.1. However, this is not the regular version of Windows as it comes with a custom user interface, which allows users to switch between console mode and desktop mode on the fly. Gaming is done via the console mode while the desktop mode allows users to use the Alienware Alpha as a regular PC running on Windows 8.1 if they plug in a mouse and keyboard. This is optional however and one can easily use the Alienware Alpha without the need of any peripherals. In this case, the device can only be used for gaming, which is done with the help of the Steam Big Picture Mode, a shortcut to Valve’s platform.

Hardware-wise, the Alienware Alpha comes equipped with an Intel Core i3 processor running at 2.9 GHz, 4 GB DDR3, 500 GB storage, and a custom Nvidia Maxwell GPU. This is just the standard version but there are also a couple of other variants featuring more RAM, larger hard drives, and more powerful CPUs. All of this comes at a price as you might imagine, and the upgraded Alienware Alpha’s can end up costing as much as$700. Interestingly enough, even the standard version presumably runs games at better resolutions and frame rates than the Xbox One and PS4 versions of the same titles. The Alpha is expected to hit the shelves on November 21st and will come bundled with two free games: Pay Day 2 and Magika.