Microsoft Surface Pro 3 vs Surface 3: power user machines or not 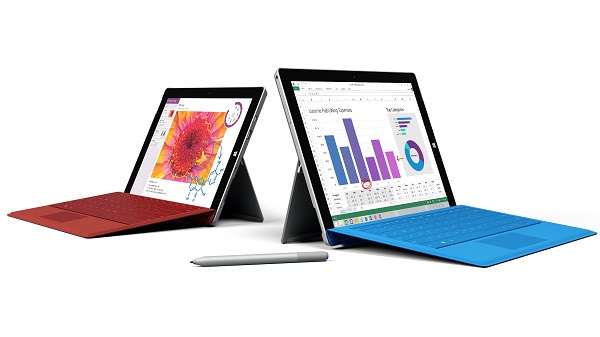 Microsoft Surface Pro 3 vs Surface 3: power user machines or not

The Microsoft Surface Pro 3 is due for an upgrade shortly, as discussed in our Surface Pro 4 rumor round-up article, but that doesn’t mean that this convertible laptop is outdated. Microsoft has launched the light-weight (you can add what meaning you would like to that term) Surface 3 as an alternative to a Chrome OS-base netbook, more or less. This time around, I’ll be discussing whether the Surface Pro 3 is truly a power user’s machine and whether the Surface 3 can hold up for power users of different types. Before I get started, though, you should know that there are huge differences between the Surface Pro 3 and the Surface 3. First off, the convertible Pro 3 is made with power users in mind, while the Surface 3 aims to cater to casual Windows users who prefer to cloud compute and surf the web. That doesn’t mean performance isn’t good on the latter one, but let’s find out what each has to offer.

In this Surface Pro 3 vs Surface 3 comparison, you will find information only about the base models. With each upgrade for a machine, you can get more performance and better hardware, so keep that in mind in case you’re trying to decide on what gadget you want to buy this year. To start off, expectations of the Surface 3 were not high on my part, but I did think it would have been a great gift for Mother’s Day. Seeing as it’s Mother’s Day soon enough, I though that my not-so-tech-savvy-mom would enjoy having it. After having a little one on one time with the Surface 3, I changed my mind, as I was quite surprised with what the Surface 3 can actually do.

The Microsoft Surface 3 is an impressive machine that merges portability with practicality, which is something that I usually value in products. Regardless of the fact that convertibles are king in my world, the Surface 3 turned out to be impressive and can really take on the multitude of Chromebooks that were recently launched. One of the most attractive parts about this is the Surface 3 price, which starts at $500. That is usually seen as quite affordable for a convertible, as one of the cheapest ones with the best bang for buck, the Asus Transformer Book T100 is only $100 less, and doesn’t come with the features the Surface 3 comes with.

The favorite of many Surface 3 users is the full version of Windows 8.1, which means that essentially, it’s a smooth operator that will let you do anything you would imagine doing on a desktop machine or a conventional laptop. Still, there are some disadvantages to the Surface 3, which I should mention early in. These are rather disappointing actually. You need to reserve an extra $130 for the Type Cover and another $50 for the Surface Pen if you want a truly complete experience with the Surface 3. You need the Type Cover in order to be able to use it as a laptop, while you need the Surface Pen in order to be able to interact with the touchscreen in an easy fashion. Although the Surface Pen doesn’t seem to be a necessary investment for everyone, it does have its advantages and styli are becoming more and more popular nowadays. That brings up the total investment in the base model of the Surface 3 to around $680, which is rather steep in my opinion. Regardless, you are getting top-notch hardware for the price, so for those who can muster up the cash, it’s probably worth it. The good news is that old Type Covers are compatible with the Surface 3, so if it’s not your first Surface, you can consider yourself lucky.

Although the Surface 3 aims to be the replacement of laptops for average users, its 10.8 inch 1920*1280 resolution display might not cut it for most people. Still, the 3:2 aspect ratio display is pretty high-def and nice to look at, so that shouldn’t necessarily be a deal-breaker. We would have loved to have e bigger version for the same price, though. That display as well as the design of the Surface 3 make it considerably smaller than the Surface Pro 3, which means it gains a few extra points when it comes to portability. The materials are much the same, so you’re definitely getting a premium device whether you choose the Surface 3 or the Surface Pro 3. The magnesium chassis of the tablet/laptop hybrid feels great in the hand and still manages to stay lightweight, which is pretty neat.

The performance is what sets the Surface 3 and Surface Pro 3 apart. The Surface 3 comes with amobile-friendly Intel Atom X7 processor clocked at 1.6 GHz, so you can imagine that you won’t be getting a lot of Photoshop or Adobe Premiere editing in on this machine. It might hold up for a little while, but you shouldn’t purchase the Surface 3 if editing is what you’re planning to do on it. On the other hand, if you’re in the business of web-design and coding and such, this might just cut it for you. The fanless design will make you screech on occasion with heavy use, as it will eventually heat up a bit, but not as much as to be bothersome in the long-run. Any tablet or smartphone or mobile gadget in general tends to heat up with prolonged, heavy use, and the Surface 3 is no exception to that. It does handle heavy work-loads pretty well though and I haven’t found it stuttering with random apps like a web browser, diagnostics tools, a bit of editing, a bit of gaming and a bit of chatting and stuff. Once I got into heavy editing, it was not really working for me.

The fact that Microsoft decided to put a slew of ports on the Surface 3 means quite a few good-behavior points in my book. Surface 3 ports include a USB 3.0, microSD slot, mini displayport, microUSB charging port and that’s about it. The kickstand is rather annoying on this one, as it comes with only three different positions, which is something that the Surface Pro 3 is much better at. The Surface Pro 3 kickstand can be adjusted in as many ways as you want it to (more or less), while the Surface 3 is stuck on tablet, stand and bigger stand mode. Not that much versatility there, I’m afraid. Still, for a convertible tablet/laptop hybrid, it’s acceptable. It’s better than what you could do with the Asus Transformer Books, so yay.

One impressive trait of the Surface 3 is battery life. With average use, I got about 9 or even 10 hours of use on a single charge, which to me is impressive. It might not be to others. Still, if I forced the tablet even a little bit, battery life would drop considerably. Lots of Youtube really hurts the battery life, but that’s something to be expected. One thing that might be worth mentioning is that many people will not enjoy the touch-friendliness or lack thereof of Windows 8.1. I personally like it and have gotten used to it, but that’s not the case with people that are first-time Surface users. Once Windows 10 is out, that aspect of the user interface should be remedied. Windows 10 is set to be released this Summer, so if you decide to boy the Surface 3, you will be able to upgrade and hopefully, the user experience will be much improved.

On the last note about the Surface 3, the cameras are pretty ok. They’re not iPad – level ok, but they’re good. The front camera is a 3 MP one, which is not much but enough for the occasional Skype video call and the rear camera is an 8 MP one, which is pretty neat. Although taking photos with the Surface 3 isn’t very fun as it’s quite big and cumbersome, it’s still an option so you can’t say that something’s missing from it in this respect. Overall, the Surface 3 is not for power users, but it can be a great device for power users on the go. If you have the cash and need a very portable, usable, complete, small device to do some work on or have as a secondary device, even you, the power user, will be quite impressed with the Surface 3.

The Surface Pro 3 is definitely powerful and you will be able to do most of the things you want to on it, including heavy editing work, but you will feel it get sluggish with prolonged use. In my experience, rendering in Sony Vegas took longer than on my Toshiba Qosmio laptop, with about 40 minutes, for a rather small project that I was working on. Photo editing was fine, movie watching and gaming was pretty smooth, although Dying Light… that’s a whole different story. To sum it up: I couldn’t get it working. Still, to be able to use Sony Vegas Pro with virtually no hiccups, and to use Photoshop smoothly, and game smoothly, and browse smoothly is quite impressive for a convertible laptop=/tablet hybrid. Note that you can’t do them all at once. No chance.

If we’re to get into why the Surface Pro 3 can handle much more than the Surface 3 can, we should see what hardware we’re working with. Remember that we’re only checking out the base model for each. The Surface Pro 3 comes with a larger 12 inch display with a 2160*1440 resolution, with the same 3:2 aspect ratio, an Intel Core i3 processor clocked at 1.5 GHz backed by Intel 4200 graphics and 4 GB RAM, as well as 64 GB internal storage. The Surface Pro 3 gets a USB 3.0, microSD, mini DisplayPort and a cover port, so you’re getting about the same connectivity as with the Surface 3. That speaks a lot in favor of the Surface 3, as well. The battery life on the Surface Pro 3 is slightly inferior to that of the Surface 3, as I was able to get about 8 hours out of it with average use. That’s still ok for a convertible in my book. The cameras are negligible, as they’re both 5 MP ones. The speakers are pretty good, but they do need a lot of improvement.

These being said, I would truly recommend the Surface Pro 3 as a daily driver for power users. If you can manage your work-load well and don’t overdo it, the Surface Pro 3 will handle pretty much everything you throw at it. It does get the occasional hiccups and you do need to cut corners if you get some bugs, but overall it’s a positive user experience. While the Surface 3 is the optimal device for average users who surf a lot, the Surface Pro 3 can cater to power users generally. Now this can’t be applied to everybody, as being a power user has different definitions. If the Surface Pro 3 worked well for me and the tasks that I told you about, it doesn’t necessarily mean it will work great for you. Your best option when trying to decide between the Surface Pro 3 vs Surface 3 is to try and test-drive it for a day at least. See what each can handle and when it konks out. Personal experience is always better than third-party advice. Mantra right there!

Saul BowdenMarch 27, 2017
Read More
Scroll for more
Tap
Samsung Galaxy Note 4 – How bad updates prevent people from enjoying their phones
iPhone 6 and what it will spawn: iPhone 6S or 7
wpDiscuz