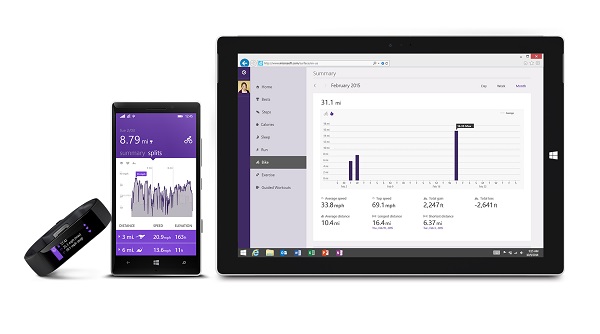 The Microsoft Band quickly became pretty popular after it was launched as it came as a relatively affordable fitness tracker, with no extra ambitions of becoming the popular smart watch the Apple Watch has become ever since its launch. The Microsoft Band is the Redmond giant’s first attempt at a wearable device and albeit a good one, many people have complained previously about the lack of support for third-party apps. That complaint seems to have been remedied with the new announcement from Microsoft.

Although a beta version of the Microsoft Band SDK has been released in February, developers could not properly create apps for the fitness tracker as the beta SDK didn’t allow access to certain sensors and features found on the device. With the new SDK, which developers can get from the HealthVault Developer Center, they can create tiled apps and have them work with all the sensor in the Microsoft Band. Those who choose to write for the Microsoft Band will be able to sell or give their apps away on the platform of their choice, be it the iTunes app store, the Microsoft store or the Google Play store. With full access given to all the features and hardware of the Microsoft Band, we should expect more and more apps being made for the wearable. As such, the popularity of the device might as well increase as those who are not interested in smart watches but would like a fitness tracker that gets all the necessary information and feeds it back through an easy-to-use platform like Health can find those things in the Microsoft Band.

Microsoft has been working hard to make the Microsoft Band as interesting as possible and with the new addition of the Bike tile, even bikers can accurately track their cycles with the gadget. As more and more people seem to be getting interested in all that’s Microsoft and Windows 10, the company might have a good shot at leveling out with Android Wear at least in the next year. We are not sure what 2015 holds for us in terms of wearable technology, but we’re sure to see something new coming from Microsoft, too.

iPhone 6 and what it will spawn: iPhone 6S or 7
Nintendo Delays Console In Development, Switches Focus to Mobile Devices