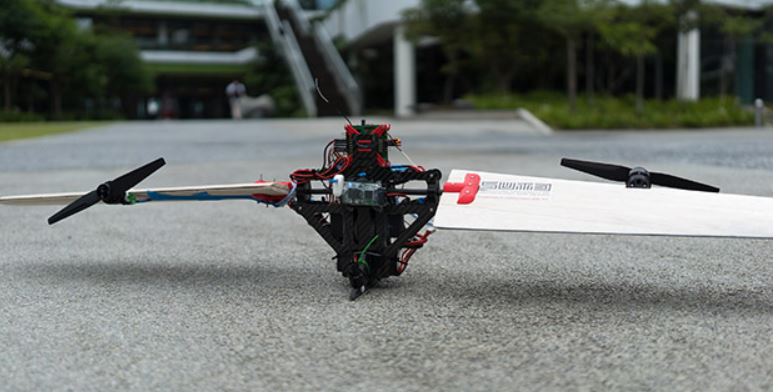 Please make the acquaintance of THOR, the Transformable HOvering Rotorcraft. While it doesn’t come with a hammer, it does have a servo and bearing to enable its transformation. THOR is a drone that can transform between two modes of flight: hovering and cruising.

Hovering and Flying In One

In the realm of flight physics, two different types of systems manage hovering and cruising. Rotors enable hovering and offer fantastic vertical control, but are neither good for long distances nor for supporting heavy loads. In contrast, wings and horizontal propulsion are ideal for covering long distances and for carrying heavy loads. However, this system does not allow handling the vertical plane with any proficiency.

For years, researchers have been trying to develop a practical drone design that can utilize both hovering and cruising. Inevitably, the designs proved inefficient and impractical. When hovering, the wings are useless. Similarly, when flying, the rotors are useless. The result was always that when in one flight mode the other mode’s propulsion system was not utilized, was additional weight, and also made the drone impractical for various jobs. Finally, a group at the Singapore University of Technology & Design developed a design that solves the problem.

It’s All About That Design 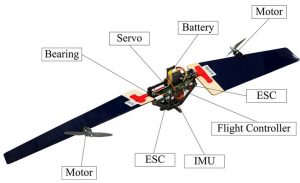 The team developed a design that allows both modes of flight. The design is efficient and practical because both modes utilize all of THOR’s aerodynamic surfaces. When the drone is in flight mode, it has two wings each with a propeller. During hover mode, THOR begins spinning and the wings themselves act as the rotors. While in flight mode, the wings face the same direction, just like on an airplane. In contrast, when in hover mode, the wings rotate and end up in opposite directions, just like a helicopter’s blades.

The research team identified two key points that allowed the innovative design. First are the bearings placed between the drone’s body and the wings. The bearings allow the wings to rotate appropriately depending on what flight mode is used. Second is the motor power, primarily in hover mode. The motor must have sufficient power during the transformation so that THOR doesn’t just fall to the ground. It needs enough power to create the instantaneous transformation without losing altitude, but not so much power that the motor will break the wings.

Furthermore, the research team created a streamlined design. As mentioned earlier, all aerodynamic surfaces are used in both flight modes. In addition, THOR does not have any redundant systems so there is no redundant mass. Also, there are no obstructive systems that would add mass or interfere with the primary flight modes and transformation. Furthermore, the design is scalable without the need for additional rotors as size changes. All of this makes for efficiency and practicality.

The model on display is a prototype. The research team admits that they still have some work to fine-tune the flight controls and the transformation process. Once these aspects are developed, the team envisions THOR in use for agriculture monitoring, for surveillance, and for delivering packages. Who knows, maybe next year when you order that new gaming system, you’ll meet THOR on your front porch as it flies in, transforms, and hovers while you receive your package.

What are your thoughts on THOR? Do you think the second version should be dubbed Beta Ray Bill?