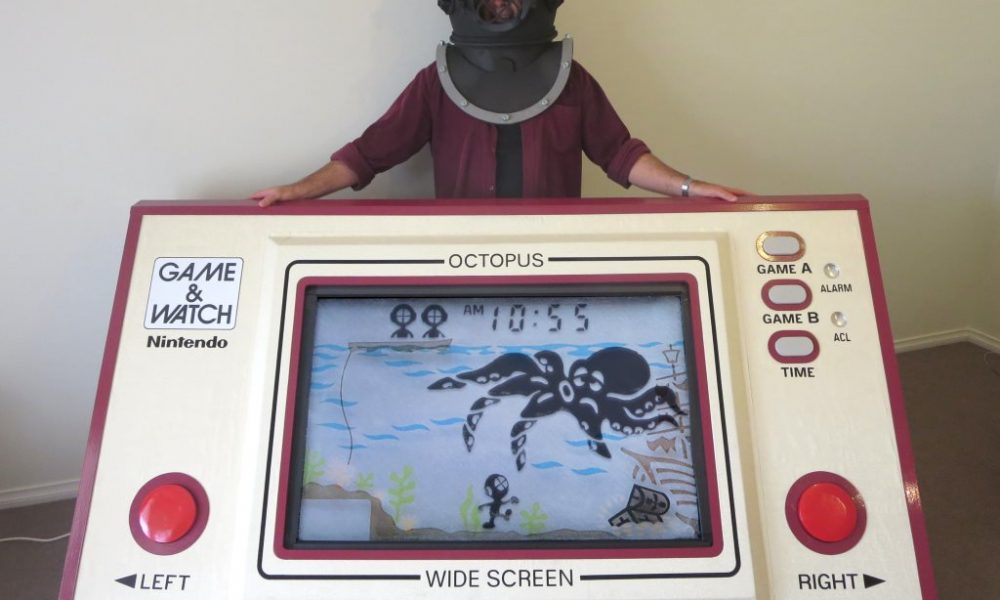 There’s only many times where I find crazy news regarding gaming before people think my feelings are disingenuous. However, I always find myself amazed at the amount of creativity and effort some of these creators go. Console modding is one of the best examples, but this is taking it to a whole new level.

For the seasoned gamers who have been around longer than I have been. I’m sure you still remember the Game & Watch, the very popular set of devices created by Gunpei Yokoi in 1980. Nowadays it’s a wonder to come across one of those consoles without having to pay a huge amount.

Enter Thomas Tilley, who saw this problem and decided to fabricate his own solution to it. If he can’t buy a Game & Watch, he created a gigantic version of the popular Nintendo console. Of course I made the motivation up, but the product does exist.

The Mega Game & Watch Octopus is a console supported by a 46’ LCD screen. It also has a computer hidden inside to project the game in a higher definition and resolution than originally intended.

The final product accurately performs as the original Game & Watch game of the same name. And since this is a recreation, it also keeps the button layout and classic design. However, since this is a giant version of the console, two players are required to cooperate with each other.

The Mega Game & Watch is made entirely out of wood. Elements such as the buttons had a more complicated design process but still fulfill their function properly. This project was presented as an exhibition for the Maker Faire Adelaide, which is an event where artists, scientists and artisans show their proficiency at big projects.

I’d love to take this thing to my home and have it hanging over one of my walls. It’s definitely a great novelty artifact to possess. Then again, it’s a 17x bigger Game & Watch which might not impress some of the current gamers.