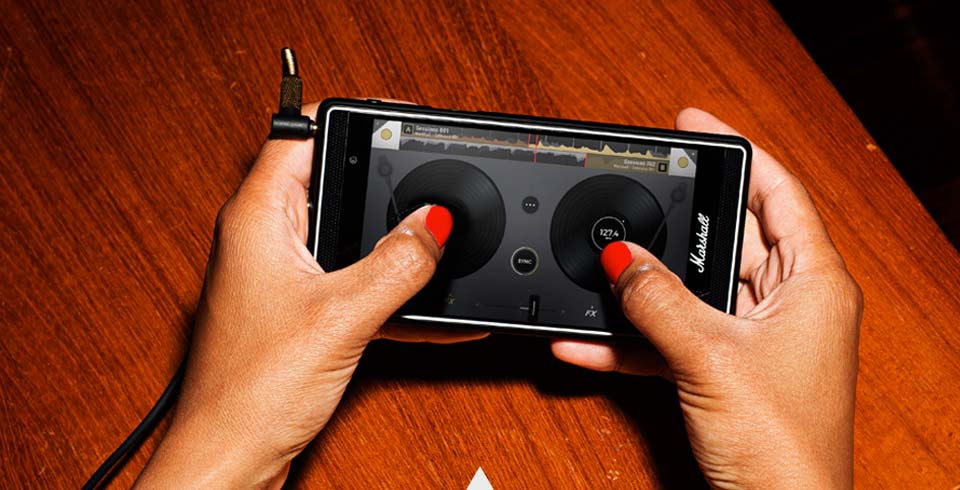 When it comes to technology, we rarely get the choice of alternative – in the subculture sense. Designing our own technology hasn’t come too far, although Moto Maker is a good example and so are accessories and ROMs that you can find on the internet. But the alternative folks don’t really have their own niche of gadgets. That’s about to change as amp-maker whose logo has become a staple of popular alternative culture decided to launch a smartphone. Marshall, the amp maker, has finally launched the Marshall London smartphone, and while it’s not an innovative new piece of technology, it carries within the loyalty fans of music have.

The Marshall London is geared towards amateur musicians, that’s clear, although it can be a staple piece for collectors as well. I was convinced the minute I saw the removable battery with the “Long live rock’n’roll” and “Marshall” decorations on the back. Although the Marshall London is a niche device designed for audiophiles and musicians, as well as DJs and recording artists, producers and so on, it stands as a milestone for alternative culture through its classic rock design elements.

Fashion is not the selling point nor is an important concern when it comes to the Marshall London handset, but even unwillingly and inattentively, the company managed to design a phone that can be used as an identifier of alt culture. No metallic finish with chamfered edges and an aura of superiority, rather a simple, classic design with rough edges and edgy prints. A flagship that’s specialized, yet stays under the $650 mark, the Marshall London is already enjoying a good deal of popularity.

The Marshall London price is set at ~$622, based on the pre-order price listed on the website. The first units of the phone should be delivered at the end of this month, and there’s no news about further availability at the moment. Price-wise, the handset is a bit expensive, but considering its unique features and audiophile qualities, not to mention unique design, it’s mostly a good deal. So what’s under the hood of such an alternative smartphone?

Releasing a smartphone is no small feat for a company that has been focused on audio equipment for the better half of the last decade. Marshall has slowly expanded its portfolio, which was mostly comprised of guitar amps, to Bluetooth speakers, headphones and now, the Marshall London smartphone. With the evolutionary step, the company had to get help and they got it from none other than Creoir. If that name doesn’t ring a bell, you should know that they’ve worked with Nokia and Jolla in the past.

Marshall and Creoir worked together on the Marshall London and created a harmonious setup between hardware and software, of course focused on audio performance and features. Since it’s a niche handset, we should first talk about the features that are unique to it and can’t be found on other smartphones. One of these features is the double headphone jack, which lets two people listen in on the same song at the same time on the same device, without having to split headphones between them and thus enjoying the possibility of a stereo sound experience and of collective work.

Up front, the Marshall London comes with dual stereo speakers for lossless audio, which is quite interesting. The phone comes with a neat DJ app that makes use of the dual output in order to let the user manipulate music through the headphones while the end result of their mixing is heard on the phone’s speakers. That’s another feature no other smartphone can boast with at the time, and with good reason. Most of us would never use such a feature. But musicians do, and plenty, which makes the target audience of the Marshall London pretty clear.

The amp-maker has also included dual microphones into the build of the black-gold Marshall London for high-quality audio recording, geared towards voice artists. Nonetheless, Marshall and co. are working on tweaks and apps so that the recording capabilities of the Marshall London are fully taken advantage of by various players in the music business.

Although clearly an audiophile’s smartphone, the Marshall London still holds appeal to the general public and smartphone enthusiast community with its features. Technically a mid-ranger, the handset makes excellent use of Android 5.0.2 Lollipop, Snapdragon 410 and 2 GB RAM combination. With a unified music app that aggregates all your music resources into one place with a global E.Q. included, the Marshal London is a cheaper walkman (FLAC support included).

With design and targeted features being the main innovations behind the Marshall London, the handset wins in variety of ways: being the first and possibly only smartphone geared towards audiophiles that keeps its price affordable, being the only phone equipped with dual headphone jacks, carrying powerful dual stereo speakers on the front and touting an alternative, easily maneuverable design.

Although this handset is made with a specific audience in mind, its decent price can make it into a great daily driver for the average person, too. Near-stock Android and a clean, music-focused user experience are things many people outside the music industry also strive for. Since Apple can’t quite handle their requests with the iPod Touch and iPhone 6S, they can turn to the Marshall London to get some ideas on what they might need from a smartphone.