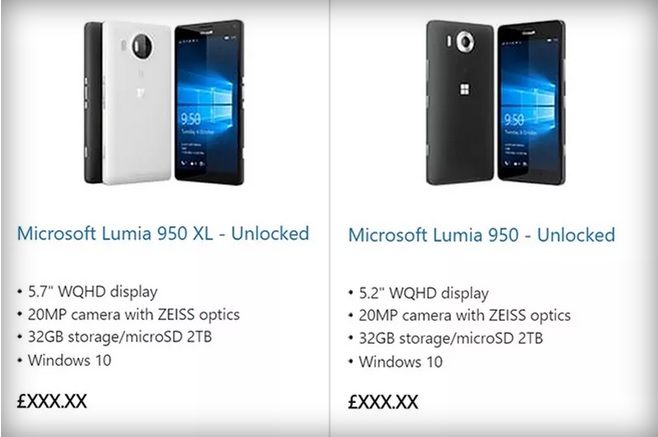 Microsoft is only a few days away from unveiling their flagship devices for Windows 10 and Windows 10 Mobile. Most exciting is the new Microsoft Lumia 950 and its larger sibling, the Lumia 950 XL as Lumia fans have waited long enough for a new flagship device to be excited about. As Microsoft focused more on mid-range and entry-level devices last year, this is the year of flagships. Thanks to diligent OnLeaks, an infamous specialist in leaks, we can now check the Microsoft Lumia 950 out ahead of its official launch. Microsoft also listed the Lumia 950 and Lumia 950 XL by accident on their website, so we’re definitely right about most of the things in this article and OnLeaks is mostly correct about the design of the handset, too.

While the Lumia 950 release date is set for October 6, we can already see the way Microsoft designed the handset thanks to CAD renders that OnLeaks got their hands on. You can check out the beautiful render of the Lumia 950 in the video below. Apparently, Microsoft is keeping up with times when it comes to the camera setup and aims to position the Lumia 950 as the successor to both the Lumia 930 and the camera-centric Lumia 1020.

Based on the render video, the Lumia 950 camera seems to be the focus of the handset: a dedicated shutter button can be seen next to the volume rocker and power button and a significantly large camera hump is on the back of the device. According to leaked specs, there will be a 21 MP PureView camera with optical image stabilization, laser autofocus and optical zoom on board the Lumia 950 and Lumia 950. With that setup, the Lumia 950 could easily become the successor of both the 930 and 1020.

With the Lumia 950 release, Microsoft will be targeting their general public as well as photography enthusiasts who have been waiting on something better than the Lumia 1020 for quite some time now. Although leaked specs for the handset do not include optical zoom, the large camera bump on the rear of the phone suggests something similar. Although we could be looking at a dual-lens setup with a depth sensor, more likely is that Microsoft is going to include optical zoom in the handset. 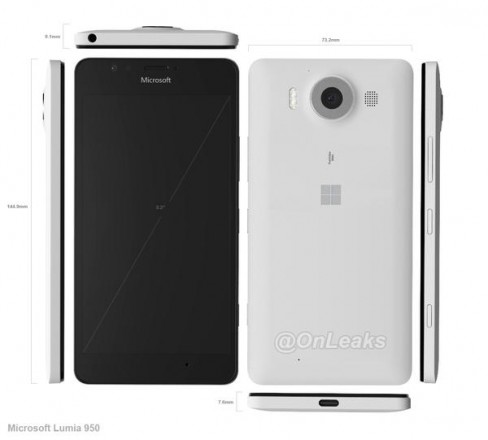 Behold the Lumia 950, courtesy of OnLeaks

The Microsoft Lumia 950 is not too different from the Lumia 950 XL, but the two flagships are going to target different audiences. The Lumia 950 features a 5.2-inch QHD display, while the XL model will have a 5.7-inch display with the same resolution. Both handsets are supposed to come with a Snapdragon 810 CPU and 3 or 4 GB RAM. Microsoft is most likely going to start the base model at 64 GB internal storage, with the maxed out variant sporting 128 GB internal storage. MicroSD storage will also be included in the design of the handsets, so expandable storage is going to be an extra convenience.

One of the more interesting aspects of the October 6 launch event is pricing and availability. The Lumia 950 is expected to cost about $600 for the base model and it should be up for sale by mid-October, while the Lumia 950 XL price is said to be around $750 for the base model. These prices are rather high, but we’re expecting quite a few innovations from the company that could be worth the investment.

Keep ogling that Lumia 950 video up there, because that’s what we’re getting. While it’s kind of a rudimentary and boring design, remember that it’s just a CAD render and the end results might be different. The render is just to give you an idea about the size and footprint of the phone, as well as the button and camera placement. We’re definitely looking forward to the finished results, how about you?