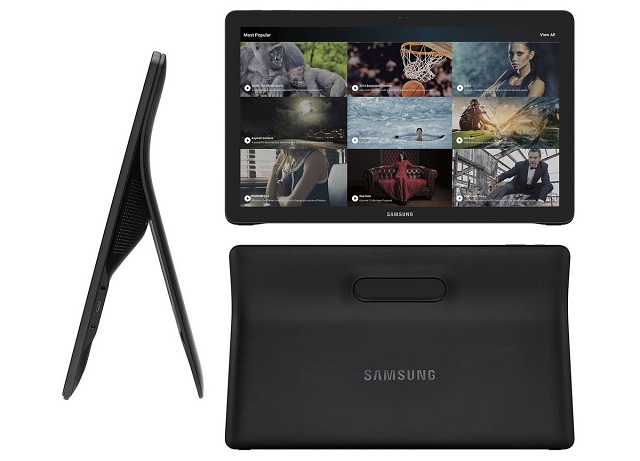 Samsung launched the Galaxy View a couple of weeks ago and as you guys probably noticed, the internet didn’t really care that much for it. Although Samsung doesn’t want you to describe the Galaxy View as a tablet, that’s exactly what it is. Fine, it’s actually a supersize tablet, but Samsung’s PR team tried mending the situation by explaining the real purpose behind the humongous gadget. Although their explanations are perfectly viable scenarios for a tablet, they are less than convincing about the moveable display – the Galaxy View.

The Samsung PR team took to their official blog to try and explain the point behind the Galaxy View. The team points out that the device shouldn’t be perceived – nor used- like a tablet. Instead, dubbing the slate a moveable display, the Galaxy View should be perceived as a portable TV of sorts, with emphasis on streaming video content. With the kickstand and massive 18.4-inch FHD TFT display, it’s not hard to confuse the Galaxy View for a TV. Despite trying to position the device as a unique gadget meant for cord-cutters, the team failed to convince me that I would actually need this device in my home. An 8-inch tablet is just as good for watching cooking shows, sports games, Netflix in the bathroom, etc. I don’t need to carry an 18.4-inch device around the house to keep up with the show I’m watching. I don’t need an 18.4-inch device just a few inches from my eyes.

I’m sorry Samsung, but the Galaxy View has little actual use cases in today’s home environment. Although it’s not heavy, it’s too big and cumbersome to be considered a worthwhile portable device. With limited specs and big focus on entertainment, I would rather recommend a simple tv box and TV for someone if they want to get a similar experience or just a smaller tablet. Lenovo’s Yoga tablets do a much better job at being multipurpose devices, because they can even be hung up on a nail on the wall.

The Galaxy View is no doubt a beautiful device, but no matter how much the company insists on positioning it as a portable display, it’s obviously just a product made for its large profit margin. I don’t think anyone who still uses a tablet would consider switching over to this beast, but if you do find yourself pondering it, please let me know what appeals to you about the Galaxy View – or any supersize tablet out there, in fact. I see no purpose to them- aside from spending money, but that’s just my opinion. Even after reading the long post on Samsung’s blog, I found myself wondering if someone was trying to sell me a TV or the Galaxy View. If you find yourself interested in the Galaxy View, its price is currently $500 on Amazon as part of the retailer’s seasonal sale.