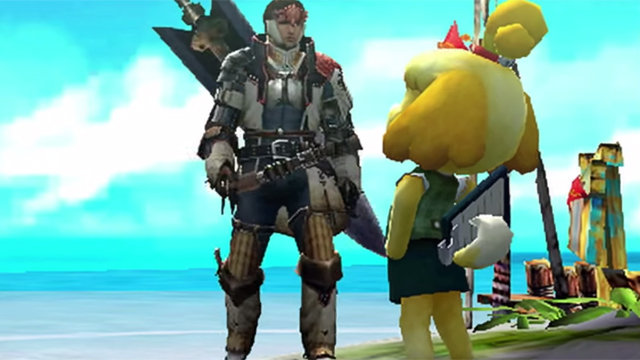 Monster Hunter 4 Ultimate, the latest entry of the successful series developed by Capcom now available in all regions exclusively on Nintendo 3DS, is receiving every month a free DLC pack which includes plenty of new content such as new weapons, armor sets, weapons and outfits for palicoes and more.

Last week Capcom revealed all the content of the new Monster Hunter 4 Ultimate free DLC pack, which includes 14 new quests, 5 new weapons, 1 Complete armor set, 4 palico weapons, 4 palico armor sets, 1 bonus palico called Pink Pal, 3 Guild Card backgrounds and 6 Guild Card titles as well as new Palico outfits inspired by beloved franchises such as Devil May Cry and Animal Crossing. A new trailer showcasing the Animal Crossing content has been made available online a few hours ago and you can take a look at it by going at the end of this post.

With Monster Hunter 4 Ultimate now out in all regions, Capcom can focus on releasing DLC packs for the game as well as continue working on the next entry of the series, which has been recently revealed during the Monster Hunter Meeting 2015. The new game will be called Monster Hunter X and it promises to bring quite a few changes in the formula, with new super actions, weapons and moves that will spice up the formula of the series and provide a more fresh experience. As the game has only been revealed, there are no news on a possible North American and European release but chances are quite high, considering how successful Monster Hunter 4 Ultimate is in these regions.

Monster Hunter 4 Ultimate is now available in all regions exclusively on Nintendo 3DS. We will keep you updated on Monster Hunter X as soon as more gameplay details become available so stay tuned to learn more about the next entry of the series and its release date for all regions.