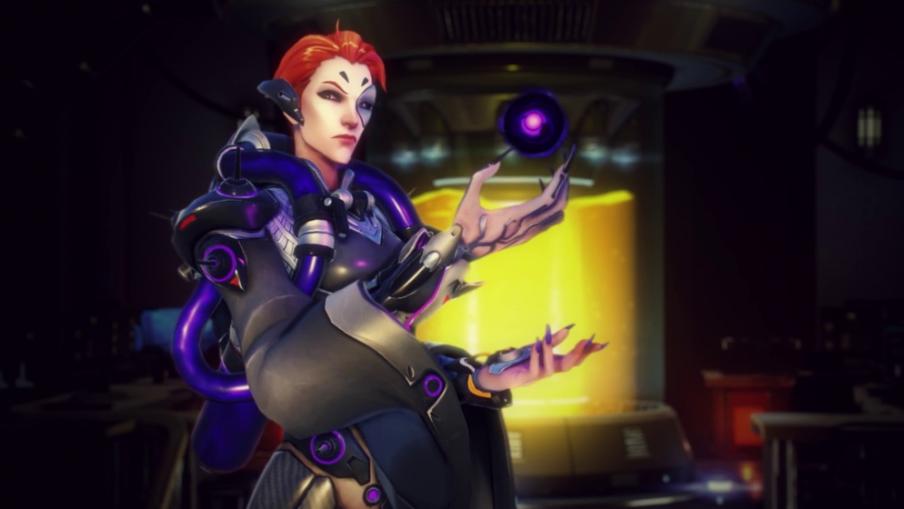 Despite the Halloween season being over Blizzard has gifted us a scary new hero to use, Moira, the Talon geneticist. After playing as and against Moira in the PTR I can be certain of two things, that she is immensely overpowered and that she is a terrifying foe to go against. Let’s delve into what makes her such a dangerous foe.

Moira’s main weapons are the biotic grasps on her hands used to heal or drain health, a beam and spray weapon set with a range of 20 meters for damage and 15 meters for healing, she sports the longest reach of any non-projectile or hitscan weapon or ability, for reference Symmetra’s longest range is 9 meters, so if you think escaping Symmetra is impossible wait until you meet Moira. Along with her range, her grasps allow her to drain an enemy’s health in order to both fill her health and healing meter, this self healing happens even if she is hit with a enemy Ana’s grenade, which normally disables all forms of healing

The most harmless yet useful abilities in her Arsenal is her Fade ability. Fade allows Moira to visually disappear and reappear in a different location, sharing this visual trait with Tracer’s Recall. Mechanically Moira gains a massive speed boost and becomes immune to damage and effects for a short period of time. This ability has a 6 second cooldown and lasts for about 0.5 seconds.

Moira’s second ability is the biotic orbs she can launch. These orbs have a 10 second timer, which is also the cooldown for this ability, and travel at high speed and ricochet when they hit a wall, however when they get near a target, healing and draining for friends and foes respectively, they slow down and begin to shrink until they use themselves up or their timer runs out

Finally Moira’s ultimate ability is called Coalescence, it is a mobile ultimate, where she fires a 30 meter long laser, in case she didn’t have enough range already. This can bypass barriers and simultaneously damage enemies and heal herself and allies, fortunately this ultimate can be interrupted via flash bang, sleep dart, or hacking.

Fortunately a few heroes seem to be able to somewhat defend themselves from Moira.

Torbjorn: Standing next to his turret causes Moira to drain the turret instead of Torbjorn semi-reliably, mostly due to the dwarf’s small stature

Doomfist: His upper cut and seismic slam allows him to quickly disengage and the rocket punch allows for an instant kill or for further the distance from the enemy Moira

Reinhardt: Thankfully the biotic grasps cannot drain through barriers allowing Rein and his team some protection. Similarly to Doomfist, Rein possesses an instant kill ability in the form of his charge.

Zarya: Her particle barriers treat Moira’s in a similar fashion to Symmetra’s laser, providing Zarya with charge as well as some temporary protection, giving Zarya players a chance to retreat and reunite with nearby allies.

Mei: Thanks to her ice block and walking abilities Mei can reliably heal and separate from an enemy Moira. In addition to these abilities Mei’s gun allows her to freeze Moira if she can get within range.

Finally this brings us to her achievements, which are no easy feats.

First off we have simple trigonometry, the easiest of the two, to earn this you’ll need to completely use up 2 biotic orbs, a healing and damage orb to be specific, without dying. A damage orb does approximately 380 points of damage when fully consumed, and due to their mobile nature getting it all to be used can be a challenge, ideally these orbs should be used in a medium to small enclosed point map. Completing this will award you with he pixel spray.

Her second achievement is called Antipode, for this you’ll have to hit 7 players simultaneously with her ultimate. My best advice for this is if you see a big team fight use that to try and get this achievement and be awarded with her cute spray.

And with that we end this look into some of the mechanics and intricacies of our new healer Moira. As you can see she is a powerful foe in the PTR right now, and she will surely be nerfed either before or shortly after release. Let us hope she doesn’t becomes a character that people complain about as soon as someone picks her, like people do with Hanzo and Genji, but instead becomes a useful part of team compositions.