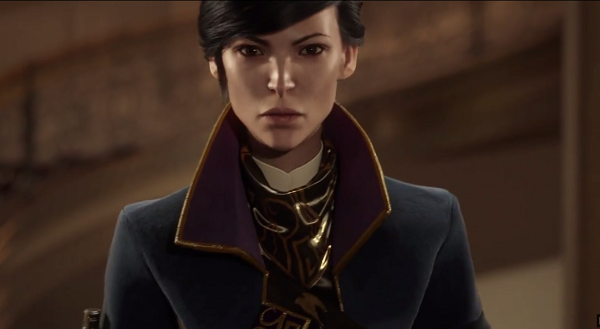 After audio of staff discussing presenting the game was leaked via Twitch yesterday, Bethesda has confirmed in its actual Twitch presentation that it will indeed be releasing a sequel to Arkane Studios’ critically acclaimed steampunk stealth title, Dishonored. The company announced Dishonored II during its official E3 presentation. They also gave us an amazing-looking trailer, which you can watch below.

So let’s get into the details. The biggest, perhaps most exciting, detail is that we will able to play as Emily Kaldwin. Dishonored II will actually feature two protagonists – Corvo, who was the protagonist of the first game, and Emily, the child and heir to the throne of Dunwall who he was striving to rescue. Emily’s all grown up in the trailer, and she’s got the Outsider’s mark, which means she has all of the awesome powers Corvo had in the original game. And more, judging from the trailer.

We can see Emily using an ability similar to Corvo’s blink. We also see her use the freeze time ability and what appears to be a brand new ability, where she turns into some sort of shadow and crawls towards her target like that creepy girl from The Ring. The Dishonored II trailer also shows us a few snippets of Dunwall. At least, presumably it was Dunwall. The technology has advanced – we see Emily have a sword fight with one of their new and improved robots. There’s no more plague, but there’s clearly still plenty of death and corruption. And locusts, apparently.

There’s also that moment near the end of the Dishonored II trailer, where the man Emily is targeting says something interesting. “Think before you strike. If you kill me, you become the assassin we claimed you were.” That may be an indication that Dishonored II will feature the same sort of decision-making that was a big part of the original game. The player chooses whether to kill their target or find some other way to punish or eliminate them. The decision to play lethally or non-lethally had a big impact on the original game’s outcome and it was one of the things that made the story so intriguing, so let’s hope they’ll carry that feature into the sequel.