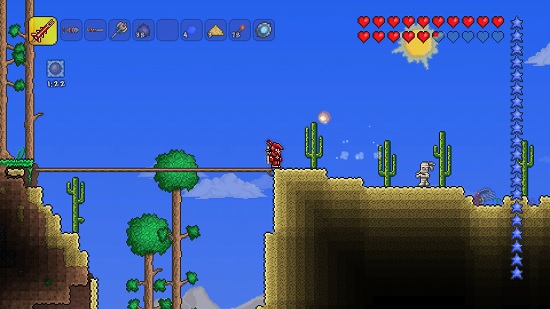 Terraria will see a Wii U and 3DS release early in 2016, according to developer 505 Games. Rumours of a Wii U and 3DS release for the massively popular 2D sandbox have been circulating for a while thanks to a few online retailers posting the game early. Now, those rumours have been confirmed. Terraria will come to Nintendo’s consoles thanks to a partnership between 505 Games and Re-Logic.

Terraria for Wii U and 3DS will feature a new control layout that allows for touch input, 505 Games’ Justin Reynolds says. “Both the 3DS and Wii U versions will feature intuitive touchscreen controls, allowing Terrarians to reach directly into the world for the very first time to fashion elaborate structures and fight off enemies with fingertip & stylus control.”

Terraria for 3DS will also be shown off at Gamescom in August. That’s only a week away, which doesn’t give people much notice. But if you can make it to Germany on time, the Nintendo booth and Gamescom will feature a hands-on demonstration of Terraria for 3DS.

“With over 1,300 crafting recipes, 150 enemies and 15 bosses to battle, Terraria gives players endless hours of fun as they dig to the ends of the earth. We can’t wait to see what Nintendo players dig up!” Reynolds says.

There may be more details to come, and Reynolds suggests checking the official forums and following Terraria on Facebook and Twitter to stay up-to-date.