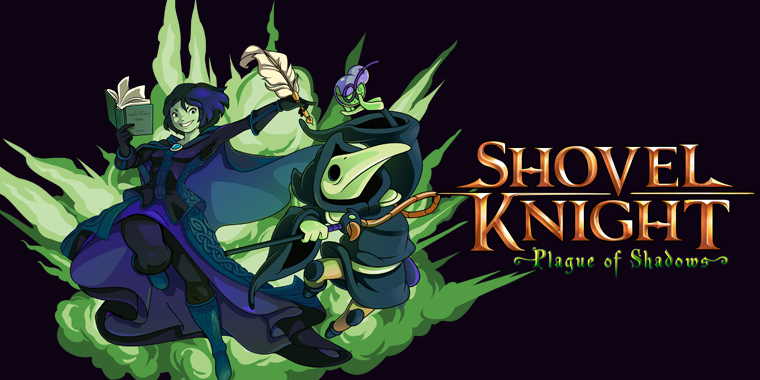 Shovel Knight, the excellent platform game developed by Yacht Club Games now available on consoles and PC in all regions, has managed to become incredibly successful thanks to its gameplay experience that masterfully combines old school elements with more modern ones.

If you’re a fan of the game, you most likely already known about the Plague of Shadows expansion, which will include a lot of new content that will further expand the excellent Shovel Knight gameplay experience. And if you are attending Gamescom 2015, you will be happy to know that Shovel Knight Plague of Shadows is going to be available in playable form at the Nintendo booth. The team has been tweaking the experience since the previous public showing of the game so it will be interesting to see the changes made to the expansion.

The Shovel Knight Plague of Shadows expansion will include a new playable character, the Plague Knight, who will embark on a new quest that will be different from the main Shovel Knight adventure. The Plague Knight will have to overcome a lot of difficult challenges, solve puzzles and eventually fight his old allies, the Order of No Quarter, to obtain the ingredients needed to create the ultimate poison. The Shovel Knight Plague of Shadows expansion is also going to include a new Alchemy System which will allow players to create loot and craft equipment, new objectives and enemies, new areas and new paths in older stages, new Plague Knight specific challenges, new bosses and much more.

Shovel Knight is now available in all regions on consoles and PC. The Plague of Shadows expansion has yet to receive a final release date but we will let you know more about the matter as soon as possible so stay tuned for all the latest news on the excellent Yacht Club Games developed platform game.