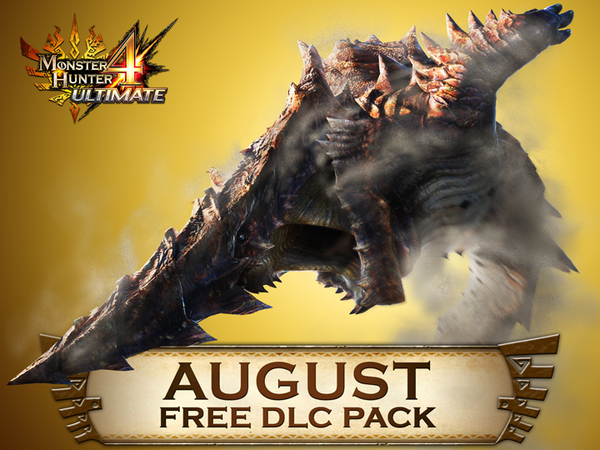 Since it’s release a few months back, Monster Hunter 4 Ultimate, the latest entry of the series developed by Capcom now available on Nintendo 3DS in all regions, has received free DLC packs every month introducing new content to the game and expanding its experience considerably.

A new month has begun last week but nothing has been said about the Monster Hunter 4 Ultimate August DLC pack until this morning, when Capcom released a brand new trailer detailing all the new content hitting the game this month. You can check out the video right below.

The August Monster Hunter 4 Ultimate DLC pack includes 10 new quests, 4 new Challenge Quests, 1 Bonus Palico, 1 Guild Card background and 7 Guild Card titles. The August pack seems to be quite light in content when compared to the previous ones, but it seems like players will be busy for quite some time with the final quest from Episode 6.

The next entry of the series to be released in Japan in a few months is Monster Hunter X. The game has been announced earlier this year and has started getting more gameplay details since the reveal of the game’s November release date. Yesterday two new Monster Hunter X gameplay videos have surfaced online, showcasing two weapon types with different features. All Monster Hunter X weapon types will come with plenty of different features that will allow hunters to employ a variety of fighting styles and strategies.

Monster Hunter 4 Ultimate is now available in all regions exclusively on Nintendo 3DS. The next entry of the series, Monster Hunter X, will be released in Japan later this year exclusively on Nintendo 3DS. The game has yet to receive a release date for North America and Europe, but we will keep you updated on the matter as soon as possible so stay tuned for all the latest news.