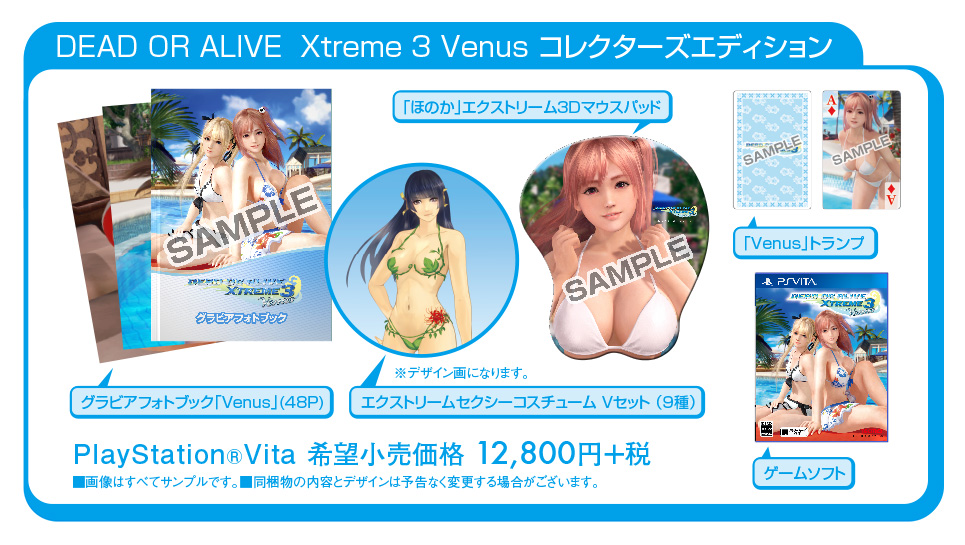 The latest main entry of the Dead Or Alive series has only been released earlier this year but the team is already working on another games based on the series, the third entry of the Dead Or Alive Xtreme spin-off series. A few weeks ago Koei Tecmo announced three Collector’s Editions of the game, which will include a variety of extra goodies, and today some new images have surfaced online, showcasing these extra goodies.

Last month the Dead Or Alive Xtreme 3 official Japanese website has been updated with some new screenshots showcasing Marie Rose, Honoka and Kasumi as well as new videos showcasing characters and more.

Dead Or Alive Xtreme 3 is going to include nine playable female characters, which have been chosen from 15 candidates. The nine playable characters will be the already mentioned Marie Rose, Honoka, Kasumi, as well as Ayane, Kokoro, Nyotengu, Hitomi, Momiji and Helena. No DLC characters are currently planned.

Some time after the game’s reveal, Team Ninja head Yosuke Hayashi confirmed that an adjusted version of Dead Or Alive Xtreme 3 might be released in the West if demand is high enough. We haven’t heard much more about the matter since but more is definitely going to come as we get closer to the Japanese and Asian release of the game.