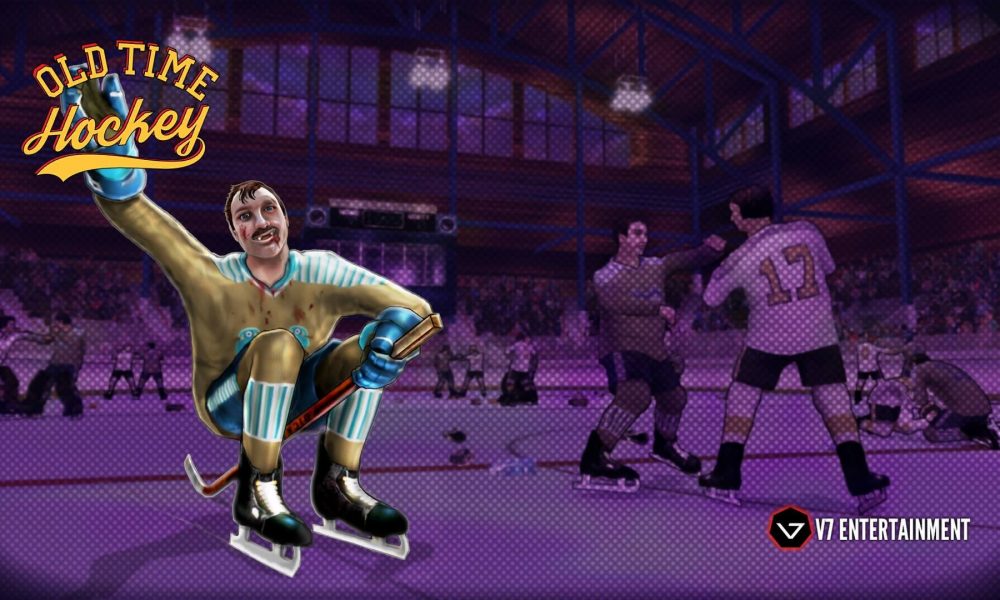 No, just no. I refuse to let this game ruin the cherished memories of NHL 94, NHL Rock the Rink, and ESPN NHL 2K5. There’s nothing “old” about it. From the outside looking in, Old Time Hockey looks like it represents the classic sport. However, once inside the experience turns into something scary. Like a fever dream of what hockey would be like without some conscious control at the helm. After I finally gave up and started writing this review, I felt like the nightmare was slowly fading, but ever there in the recesses of my mind.

First booting up Old Time Hockey, everything looked fine. There were appropriate and cheesy tunes accompanying the self-aware, outdated visuals. Plus, a backdrop image of two teams fighting toe-to-toe on the ice. Then the main menu appeared and the horror began. You only have an exhibition mode and a “story” mode to look forward to. No arcade-like endeavors or online play. There’s up to four players local-multiplayer at least…so there’s that. Unfortunately, you won’t want to play this game with anyone for fear of giving them a false impression of a good sports video game.

The story mode is as basic as they come. You’re told the half-hearted story of the Schuylkill Hinto Brews through loading screens and newspaper clippings and their run to victory in the 1970s. Some of the team’s better players got injured in an all-out brawl on the ice and have since been on a bad losing streak. This is where you come in and try to reach the playoffs by winning however many games needed as dictated by your difficulty settings. Now there’s no orchestrating or controlling anything major (except for the lines which is still pretty minimal) and you control the entire team through each game. Don’t expect any free agent signings or draft picks or anything like that. 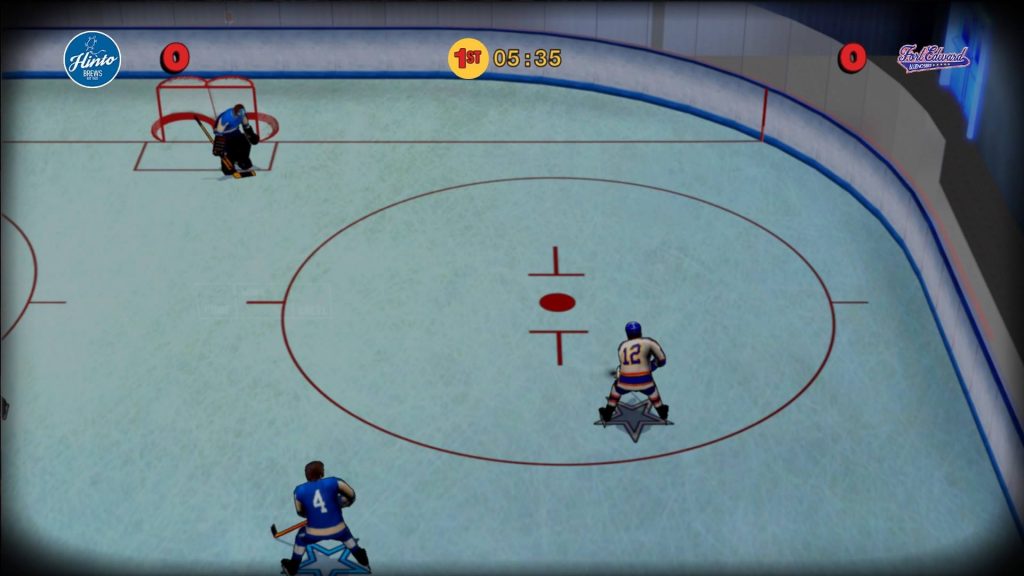 The user interface is also rather simple for this mode. There’s a calender for you to view upcoming games and other tidbits and spaces for you to tinker with your settings. There’s no multiple menus or in-depth options. Just one page with a handful of selectable boxes. I honestly didn’t pay any attention to a single one of them other than advance to the next game. Also, nothing particularly changes throughout your non-NHL journey. It’s the same old stuff over and over again dealing with just playing the next game. In short the story mode here is bare bones and incredibly shallow. It offers nothing more than some semblance of structure for the gameplay.

Before I go any further I feel I have to mention something. Old Time Hockey was advertised and teased, since last year, as an arcade-like title that focused on “afros, no helmets, dirty hits, bench-clearing brawls, goalie fights, stick fights, ref abuse, and just all around aggressive hockey.” Sounds like the NHL sport would finally get its own version of NFL Street right? Minus the occasional fights, none of those things happened (well, the no helmets happened, but is that really a feature?). At best this acted like a bland NHL 94 with none of the fun.

The gameplay is 5 on 5 hockey with, of course, a goalie for each team. You’ll be able to pass, shoot, check, and deke your way in order to score the most goals for your team. Most of those options will be decided by the control scheme you use. There are simple two-button controls and the setup that most hockey gamers use nowadays (which I used). The camera can also be changed as well. Just don’t expect these few options to fix this game in anyway. The shooting can feel clunky and off with the analog stick, deking almost never worked for me, and the hit detection for checks was ok at best. Although I have to give credit to the developers as the aftermath of a hard check was easily the best part of the title. Wacky sounds effects would play as the skater hit would lay on the ground with ducks flying above his head. 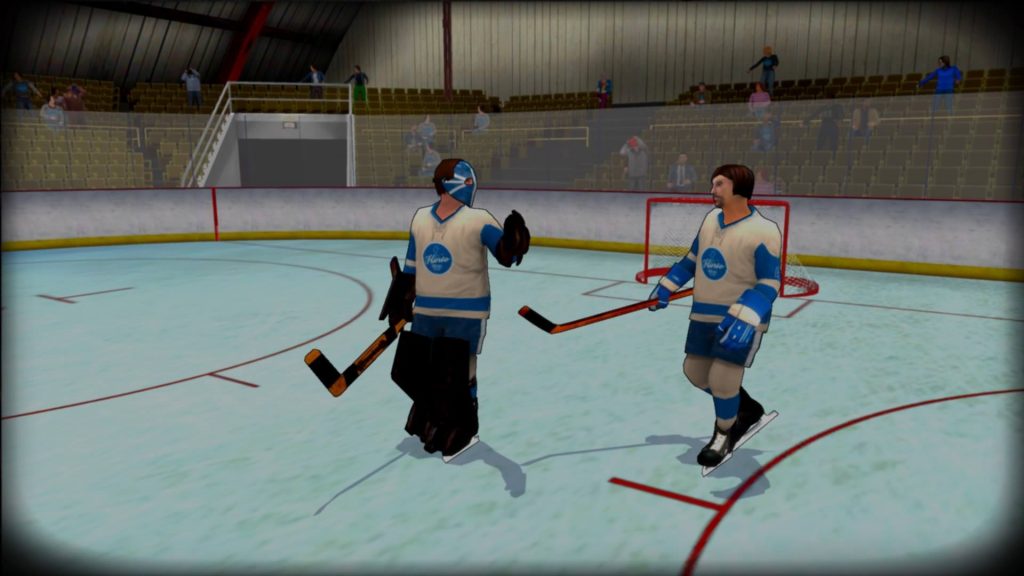 Arguably the best aspect of the gameplay is the passing. Simply holding down the correct button and the direction you want the pass to go will zip the puck right on over to your teammates stick. Honestly, if EA could implement this simple mechanic their NHL series wouldn’t be so frustrating anymore and more like the mid-2000s. Arguably the worst aspect of the gameplay is the puck physics outside of passing. Everyone should know that hockey is played on ice. A pretty slippery substance if I do say so myself. (I played hockey for seven years so I should know.) So if the puck has any ounce of “oomph” to it, the saucer would continually slide until friction wore off or it met a wall. Not in Old Time Hockey though. Imagine if you were playing air hockey, but without the constant stream of air on the board’s surface. That’s how the puck handles here and it was oh so frustrating.

Not to be outdone, the teammate A.I. is incredibly useless unless you take control of a player near the puck. They’ll let opponents skate right by them, refuse to go for a loose puck, change lines at inopportune times leading to bad breakaways, and an all-around lack of movement on both ends of the ice. At no point could I rely on my teammates unless I controlled them. It’s just a good thing I found the handy ‘cross the net in the slot’ for an easy score. Needless to say, you’ll be exploiting that classic area as long as your patience holds while playing this game.

Followers of mine might be aware of the bone I have to pick with EA’s NHL series. Their more recent entries have put simulation over fun, but there is still fun to be had every so often. That feeling didn’t even come up with Old Time Hockey. The whole thing was a stale wannabe of classic hockey days gone by. There wasn’t much redeeming value in anything this title offered. If you’re a die-hard hockey guy like me, you’re next hockey experience is better utilized elsewhere. 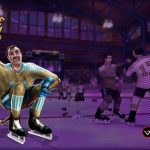 Mike GuarinoMay 8, 2020
Read More
Call of Duty May Be Going Back To WWII This Year
Destiny 2 Officially Revealed to Much Fanfare