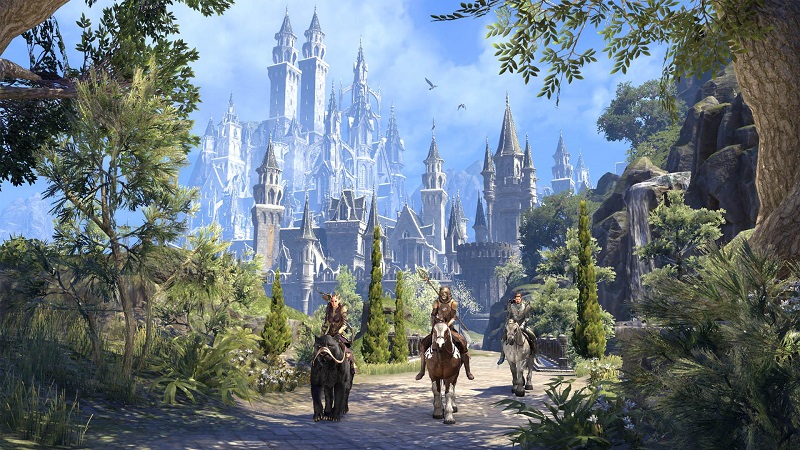 A new expansion for The Elder Scrolls Online is on the horizon, with Summerset being the latest one coming to the game. The Entertainment Software Rating Board (ESRB) have just released their official rating for the game, with the board giving the expansion an M-rating for Blood and Gore, Sexual Themes, Use of Alcohol and Violence.

The following is the complete M-rating description from the ESRB for The Elder Scrolls Online: Summerset:

“This is a multiplayer online role-playing game in which players assume the role of a warrior in the fantastical settings of Summerset. As players explore open-world environments, they can perform quests and complete various tasks. Characters use swords, axes, maces, and magic attacks (e.g., lightning, fire attacks) to kill human-like and fantastical enemies (e.g., orcs, demons, giant insects, robots). Players engage in melee-style combat, hacking and slashing at enemies; battles are highlighted by cries of pain, impact sounds, and large splashes of blood. Some quests prompt players to assassinate specific characters or creatures; one quest requires players to mount severed creatures’ heads onto pikes. Some game environments depict piles of corpses or skeletons hanging from torture devices.

Text descriptions or dialogue sometimes contain references to sexual material (e.g., “She…raped the men as cruelly as Bal had ravished her”; “Sex with attractive Nedes was considered casual recreation…”; “[T]here have been instances of intercourse between these ‘races,’ generally in the nature of rape or magical seduction…”). During the course of the game, alcohol (e.g., wine, mead, ale) can be purchased and consumed by the player’s character; one sequence/mission prompts players to engage in a drinking contest that results in the character’s blurred vision and slurred speech.”

The Elder Scrolls Online: Summerset is in development for PlayStation 4, Xbox One and PC. The standard edition of the expansion will cost $39.99, but there are several other versions that come with additional features. You can get the full details at the official Elder Scrolls Online website.