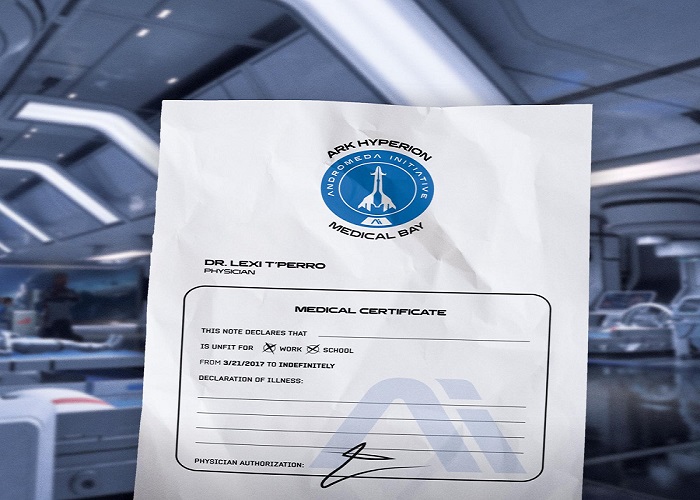 Do you need a doctor’s note for Mass Effect: Andromeda because you plan on playing it like crazy at launch tomorrow? After all you don’t want to go to dumb work or school, but you don’t want to get in trouble either. Well, developer Bioware has you covered like many other highly anticipated video games. The Witcher 3 and Fallout 4 provided fans with excuse notes too among many others.

This “medical certificate” has the official Andromeda Initiative stamp and is from the desk of Dr. Lexi T’Perro, the Asari doctor on board The Tempest. It has a place for you to put your name, check off school or work, a convenient leave of absence from the title’s launch to indefinitely, and the illness explanation of your choice. Just make sure you print it first and try your best to remove the medical equipment in the background.

For those of you planning to skip work tomorrow, Dr. T’Perro has your back. pic.twitter.com/uU2GhZWhxX

When your boss or teacher reads the doctor’s note for Mass Effect: Andromeda, make sure you have good backstory on what exactly an Asari is and why the Andromeda Initiative sounds like a space camp. May we suggest trying to pass off an Asari as a fancy name for a specific type of doctor and they’re so proud of their education, they like putting their secondary school on their forms. (Hint: Andromeda Initiative is their selected college subject or major.)

Let us know if you’re actually going to try using this and if you’re excited for Mass Effect: Andromeda. If you’re a little worried about the facial animation problems you’ve been seeing, check out our article on the subject here. It should ease you into those issues and explain what else is waiting for you in the Andromeda galaxy.