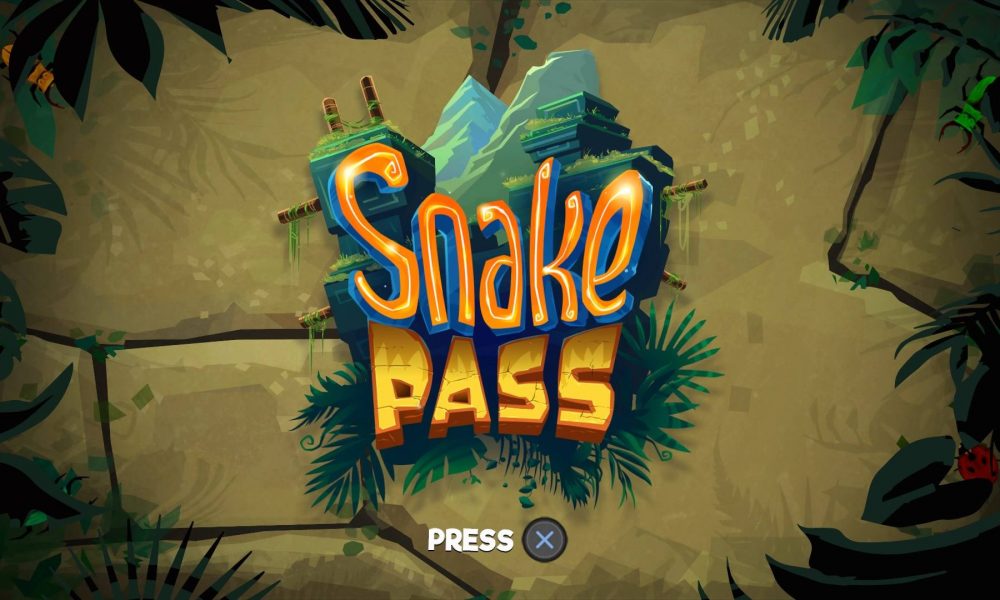 Some of you reading this may be intrigued. You thought that only Yooka-Laylee would be the only old-school inspired platformer featuring two heroes this Spring. Nope! Turns out that the team over at Sumo Digital have cranked out their own title in the same vein as Banjo-Kazooie or Spyro. I’ve been paying attention to Snake Pass ever since it was announced for two reasons. It looked incredibly simple yet engaging and overall it appeared to be a “homey” experience. I’m happy to report that it is indeed easy to learn, but hard to master and simply adorable. Yet, it’s marred by a few demanding and punishing sections.

Snake Pass follows our heroes Noodle the Snake and Doodle the Hummingbird. Their carefree lifestyle and land are threatened by an unknown, dark presence that scatters special jewels which control portals to parts of the world. What starts as an adventure to protect their home inexplicably turns into a quest to save the rest of the levels. Honestly, there’s not much plot to the game until the very end and no proper motivation was given for our heroes. At first it was to investigate the strange happens and fix their situation, but no context was given on why they kept going. What little story is revealed is told through Doodle’s speech bubbles and they’re never longer than a few sentences. In fact, the entire game will last about five to six hours on your first run. 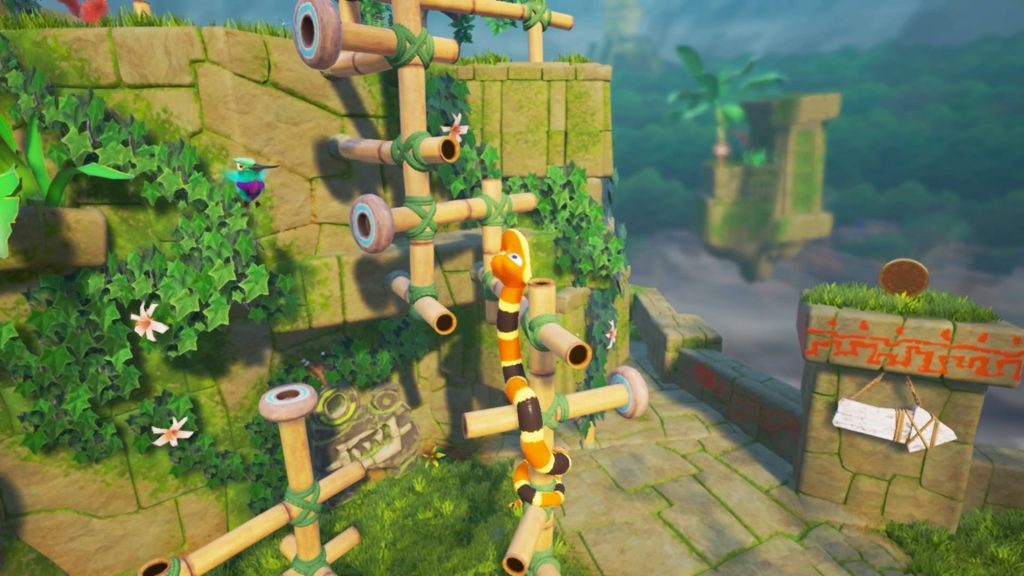 As for the duo themselves, they’re absolutely adorable and easy to fawn over. Noodle can change expressions automatically or manually, but he looks incredibly cute with the faces he makes, sounds he produces, and other minor mannerisms. Let’s just say that this Snake won’t terrify anyone anytime soon. Doodle acts as the wayfinder of the pair and a means to convey the plot and assist Noodle. He may be hyperactive at times or knowingly annoying with directions, but he too brings his own sense of charm to compliment his partner, who doesn’t really talk. Nevertheless, the two make a good team through gameplay and aesthetics.

The end goal for all fifteen levels is to collect the aforementioned jewels that are spread out through any given area. When they’re found, the jewelry needs to be brought back to each map’s gate. This will open up a portal to the next stage. It goes without saying that the objectives get a little repetitive, but the level design and gameplay more than make up for it. You should know by now that Noodle is a snake. He is the character you control and obviously he can’t run around. The title’s mechanics are all about moving and climbing objects like a…well like a snake. Naturally, the difficulty and challenges will increase the further into the experience you are. So your actions as Noodle will range from simple sliding and slithering to wrapping around and reaching for stability.

Thankfully all the levels are pretty unique and offer their own set of challenges and objects to traverse. One jewel could be simply resting on an easy to reach ledge while another requires climbing through moving poles and ledges. There’s many different scenarios you’ll find yourself in and the repetition of collecting jewels over and over again is masked for the most part. Like dealing with different dangers such as lava pits and spikes. Don’t worry puzzle fans, those are in here too. Besides figuring out how to scale or climb to your destination, sometimes a lever will need to be pulled or a wheel needs turning. These can open up hidden passageways, activate additional footholds (or slitherholds because you control a snake?), and more. None of them were too complex, but you’d need to think instead of pointlessly wandering. 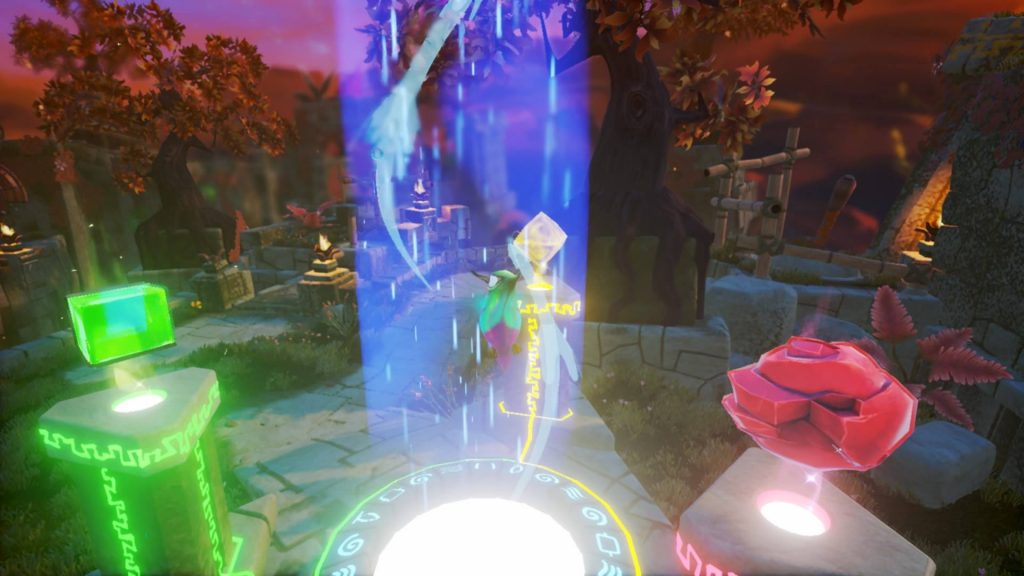 Speaking of pointless wandering, Snake Pass is also a collectathon type game. Other than the jewels, there will be many wisps (floating, clear water-like bubbles), and rare coins to collect. The amount and their placement offer a nice reason to venture into every part of a level and nook and cranny. The coins in particular will be the more challenging to acquire. You’ll most likely find these teetering over an edge with only a small pole leading to it or at an impossible spot where you have to travel to insane places no-one would try without feet. They may offer some semblance of replayability thanks to the chapter select, but I found myself ignoring them after awhile because of their positioning.

The piece de la resistance of the gameplay though are the controls. You actually have to slither like a snake. I wasn’t lying in that regard. You push forward with R2, move back and forth with the left analog stick, tighten yourself with L2, and lift your head with the X button. Plus, pressing triangle will make Doodle grab onto Noodle’s tail which gives him a little more momentum. You’ll find yourself learning these buttons easily enough and enjoying their actual implementation. I can’t tell you how much fun I had climbing and sliding around poles, platforms, and other objects without the use of legs. Reaching out with your head looking for your next stable foothold, while teetering over a mile long drop, brings a certain satisfaction to playing.

However, as well implemented as the controls are, there be some serious issues. A handful of occasions require the utmost concentration and near mastery of the controls. For example, a slim, moving platform with strategically aligned poles for wrapping around while a blustering wind pushes you a specific direction, or having to make your way a literal ninety degrees on nothing but moving poles. Literally one wrong slip-up or button push will be your downfall and cause some frustration. To the point where you wonder how a kid would get past this part if they were playing. More or less, difficulty spikes will pop up at random times in the latter half of the game. Your snake pal will die a lot and breaks will be needed. 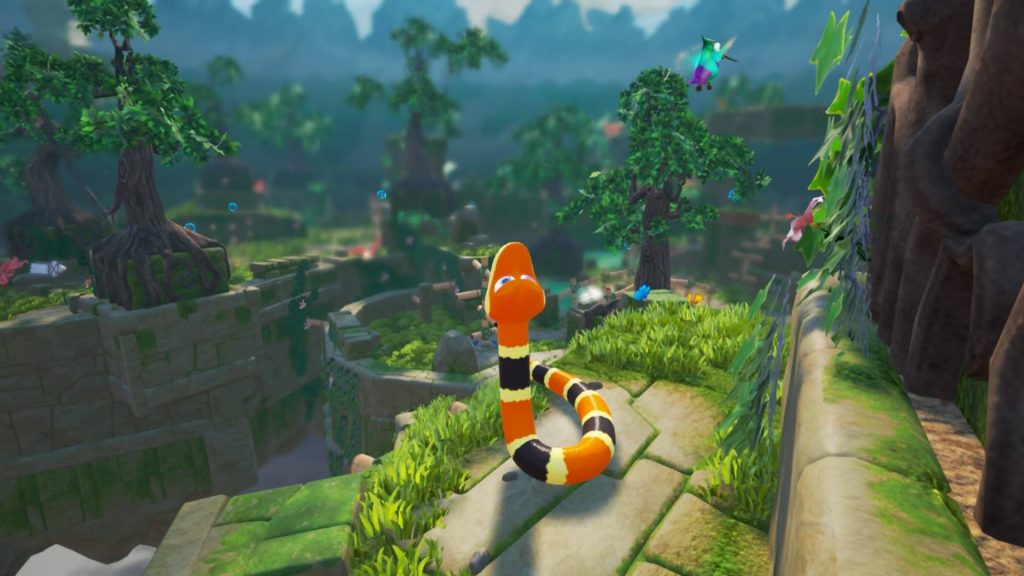 The graphics to Snake Pass are absolutely beautiful. They’re colorful, they pop, and you’ll find yourself taking in the view or surrounding scenery more than once. Of course the sunny levels will be more eye catching in that regard. The way light bounces off everything and the cut of the grass itself is wonderful. Same can be said with the soundtrack (and honestly my favorite part of the game). The bumping and relaxing tunes are incredibly relaxing and a delight to listen to. Even right now I’m humming the main theme from the main menu. Once the soundtrack is made available, a purchasing it I will be.

Snake Pass is a delightful platformer with some frustrating design choices. Still I couldn’t wipe the smile off my face or the desire to play this game after every break. The story may be nonexistent alongside the character motivations, but the gameplay involving snake movements was surprisingly addicting. This is absolutely a title that can be played by children and adults alike to much satisfaction. Just expect the occasional groan when certain platform sections come up. 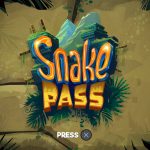