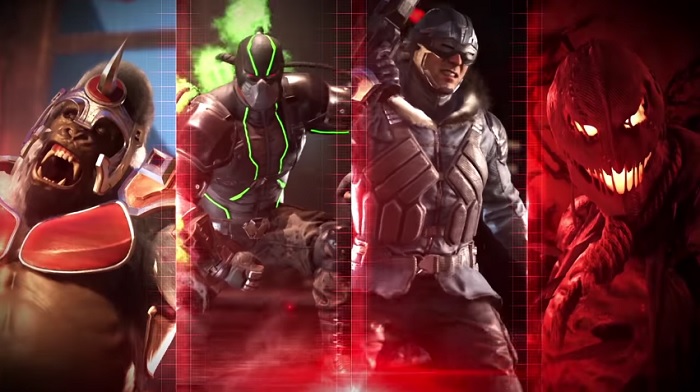 The team over at NetherRealm Studios announced that a new character reveal for Injustice 2 would take place today. Little did we know they were being quite cheeky. Turns out the new character is actually four new fighters and they’re all bad guys. Half of which are from Batman’s rogue gallery. Nevertheless, Gorilla Grodd, Bane, Captain Cold, and Scarecrow are joining the fray of Injustice 2’s roster. You can view the announcement trailer below and the creative differences on these villains. You’ll witness basic movesets alongside every characters ultimate ability.

Even if most of these guys rank low on the overall danger scale, they shouldn’t be underestimated. Ok, except maybe Captain Cold because there’s no way he would stand a chance against Superman. Gorilla Grodd started out as a Flash antagonist, but his genius level intellect and strength has required the combined effort of the Justice League to taken him down. Just so happens that Superman’s regime is kind of getting in the way of Earth’s greatest DC heroes, so Gorilla Grodd shouldn’t be taken lightly.

Everyone should know who Bane is after the Christopher Nolan trilogy and as the one who broke the Bat. Still in the grandiose of things, he’s nothing to stress over…unless you’re in a video game where comic book power levels are meaningless! Captain Cold has recently been made famous by the CW’s the Flash and DC Legends of Tomorrow. He’s cunning and has a freeze ray gun. That’s about it. Video game or not, there’s no way he’d get Superman down. Lastly, Scarecrow has been a pain in Batman’s side for awhile and his fear gas could just about make him a match for anyone in Injustice 2.

It isn’t made clear what side these villains are on, but either way, and as the title says, it’s good to be bad. Are you excited about this quadruple announcement? Did we hurt your feelings because Captain Cold is an all-time favorite character of yours? Let us know in the comments!