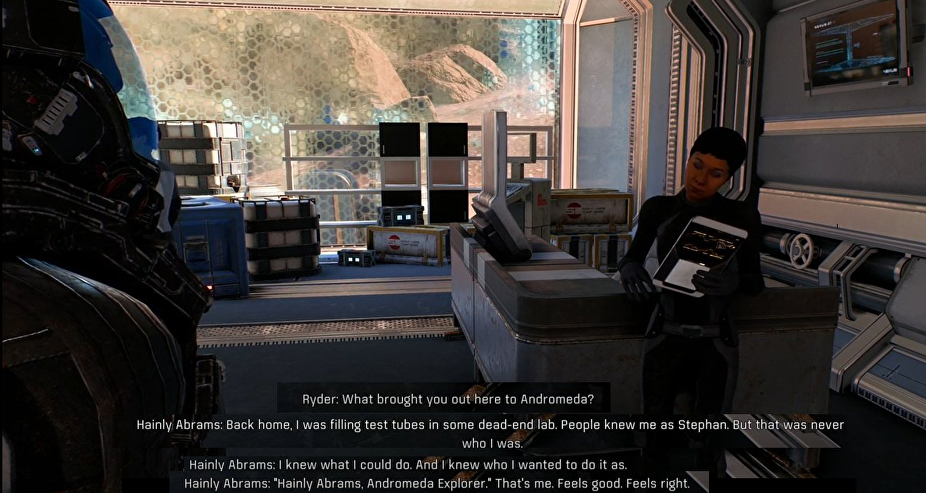 Bioware is easily one the leading game developers to include people of all races, religions, sexual orientations, and genders in their grand scale RPG titles. Although many just see the lesbian and gay relationships and swoon their hearts out. Rest assured there is much more to Bioware’s inclusivity and the Mass Effect series is no different. You want to be a gay Commander Shepard or seduce that awkward looking species? By all means go ahead. Unfortunately, the team made a small hiccup that caused some controversy the past two weeks.

Once you settle an outpost on the planet, Eos, workers and scientists come a flocking. One of them, Hainly Adams, mentions that she’s transgender when simply asked about why she came to the Andromeda Galaxy from the Milky Way. Now while many may miss this NPC due to the size of the game, some were notably upset. One side was the progressive voice saying that an LGBTQ person wouldn’t just out themselves inappropriately like that and the other was the bigoted minority saying they didn’t need to hear this or want it. Regardless, Bioware had some explaining to do.

Today, the developer finally broke their silence on Twitter. You can read the full statement below.

It’s wholeheartedly refreshing for Bioware to admit Hainly wasn’t included in a caring way, but saying the mistake was a byproduct of game design feels like a cop out. Take the good with the bad I suppose. Either way they’re working to fix it and we can fully expect some changes in the scheduled patch/update that’s coming out tomorrow.

What’s your take on this situation? Did you even know of the transgender Hainly Adams while perusing around Andromeda? Were you bothered by the way she was handled? Let us know in the comments!