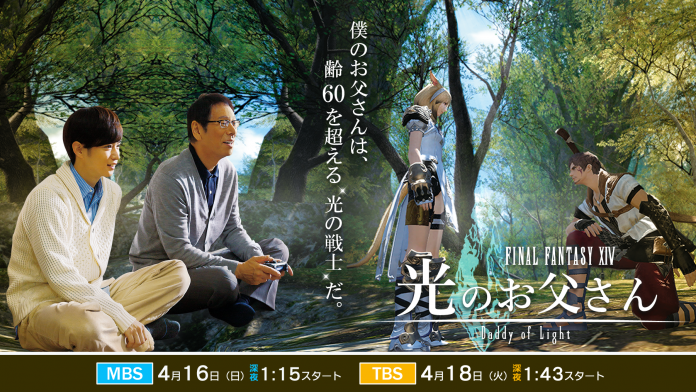 Final Fantasy 14 is getting a TV series based on a son buying a copy of the MMO and setting it up for his father to play. The son secretly helps his father with his in-game avatar without revealing his identity.  He also documents how he is reconnecting with his father in a different way.

Square Enix is know for doing promotional cross overs with other entries in the Final Fantasy series. Recently Final Fantasy 15 had a Nissin Cup Noodle hat in Japan as DLC, while Final Fantasy 14 has had Final Fantasy 11, Dragon Quest and Yo-Kai Watch crossovers. Seeing something like this especially on Netflix is huge. They are opening the door for content to be made in new ways.

The story is based on a true story with a modern twist. Watching a father and son bond over a video game is quite a surprise. Normally parents in the Japanese culture are strict on studying and schooling with very little time for gaming.

Final Fantasy 14 has gone through a lot of changes since it’s release in 2010. After negative feedback and low player base, the game was rebooted in 2013. The MMO continues to grow with constant updates and it’s upcoming second expansion, Stormblood releasing on June 20,2017.

Daddy of Light will be exclusive to Netflix. Announced to premiere sometime in April for Japan and fall for the West. Watch the sneak peak below.

John CusackJuly 7, 2020
Read More
Does Michael Keaton Have What It Takes to be a Villain in Tim Burton’s Latest Film?
What can you expect from Stellaris’ Utopia Expansion?