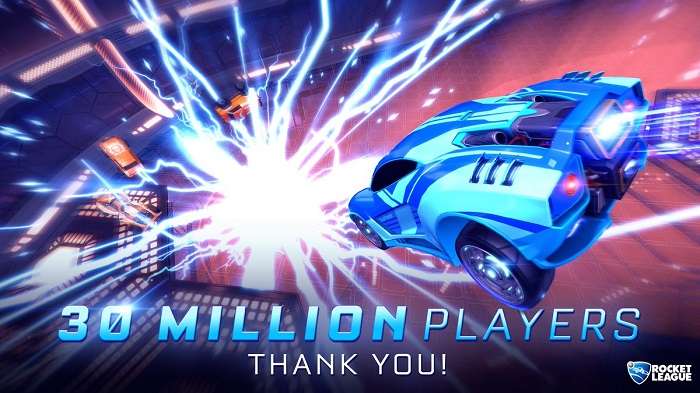 It seems like only yesterday when someone over at Psyonix had to eat a lot of loaves of bread because he didn’t believe Rocket League would be able to reach ten thousand concurrent players. This was of course in the beta days and not the worldwide hit it is now, but still. How popular is it now you must be wondering if for whatever reason you didn’t read the title? Well, developer Psyonix announced on Twitter moments ago that the popular soccer-car hybrid has reached a total of 30 million players worldwide across all platforms: PlayStation 4, Xbox One, and PC.

Not even some free-to-play MMORPGs receive those kind of numbers. Doing so for a small indie title sure is something to be proud of. Although how many of those players can actually hit an aerial and not whiff every time. Sorry, personal grudges against randoms in ranked is a problem of mine.

Rocket League is developed by Psyonix Studios and initially released on July 7th, 2015 for the PlayStation 4 and PC. It was met with critical acclaim for its simple yet fun mechanics. It’s also the sequel to Super Sonic Acrobatic Rocket Powered Battle Cars. Have you played Rocket League yet? Were you one of the first to download it when the sports title was a PlayStation Plus game? Let us know in the comments!

Matt DavisMay 5, 2021
Read More
Watch Dogs 2 Trailer Showcases the Free April Update and No Compromise DLC
Brass gets a facelift, and it was about time