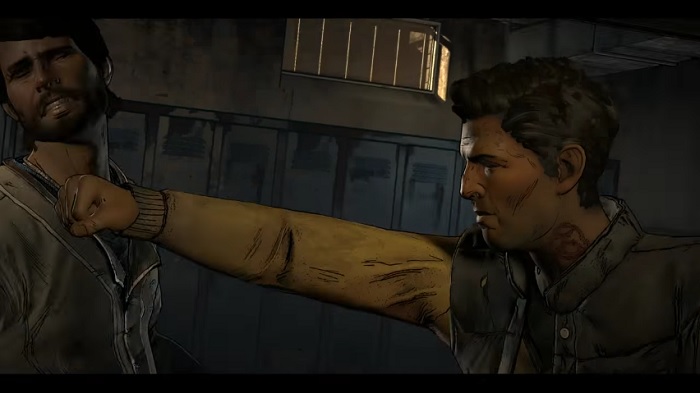 The third season of Telltale’s The Walking Dead series hasn’t shied away from what made the franchise engrossing. You better believe that deaths are a plenty, zombie kills are in huge supply, and often humans will be the real monsters . If anything we learned that in the third episode released last month.

The fourth episode of the third season will release on April 25th as revealed by Telltale late last night on Twitter and through a press release today. It will be titled ‘Thicker Than Water’ and followup on the true nature of the New Frontier settlement’s leadership. Naturally, this causes even more strain on our hero Javier’s relationship with his brother Garcia. We’re told that we’ll decide how this family will end, but knowing Telltale the choices will inevitably be meaningless.

It’s probably just a callback, but the episode’s trailer above has a callback to season one of Telltale’s The Walking Dead. “And therefore never send to know for whom the bell tolls; It tolls for thee.” I don’t see it meaning anything too important. Just something to keep an eye on.

Telltale Games also revealed that their The Walking Dead series has sold more than fifty million episodes worldwide. Additionally, they padded their milestones by mentioning the series has over one hundred game of the year awards from the like of Metacritic, USA Today, Wired, Spike TV VGAs, Yahoo, The Telegraph, Mashable, Polygon, Destructoid, GamesRadar, and the BAFTA Video Games Awards.

The Walking Dead video game series is developed by Telltale Games. Season one originally launched on April 24th, 2012 and season two debuted on December 17th, 2013. They were followed up by the 400 Days DLC on July 3rd, 2013 and Michonne mini-series on February 23rd, 2016 respectively. All of which received very positive reviews from fans and critics alike.

Are you excited to play the next installment in A New Frontier? Do you think you’ll be able to trust and make amends with Garcia? What about Clementine? Is she not the most badass little girl? Hit us up in the comments below and let us know what your favorite The Walking Dead moment is.