Lament of a PC Gamer for a Quality Wild West Sandbox 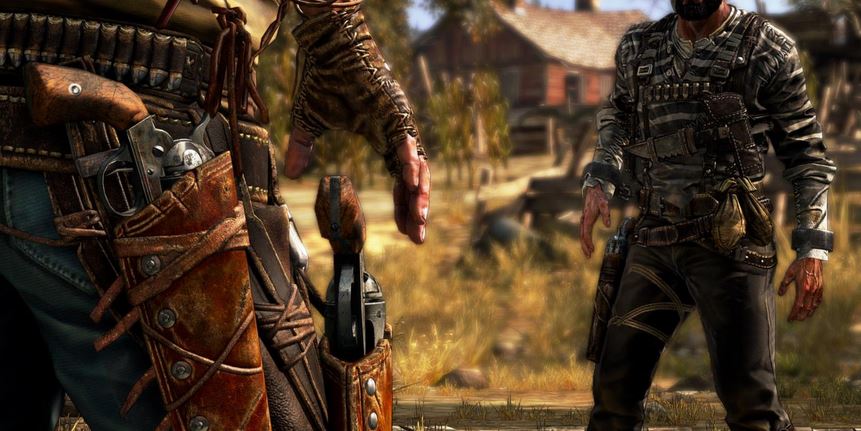 Lament of a PC Gamer for a Quality Wild West Sandbox

I’m a PC gamer, I love sandbox games, and I’m a lazy zealot for the Wild West of yester yore. Thus, my great lament for the lack of a quality sandbox game set in the Old West for the PC.

Rockstar Studios announced the scheduled release date of Red Dead Redemption 2 is now Spring 2018 instead of late 2017. If the delay means a better game, I am as pleased as an owl hoot just out of the hoosegaw. Rockstar Studios’ reputation inspires faith that it won’t be just a lick and a promise, rather an Aces high game. Alas, it will only be released for Playstation 4 and Xbox One, and for this, I mourn.

Who doesn’t want to don a war bonnet, strap on a cannon and saunter into the closest saloon to eye the Calico Queens and drink sheepherder’s delight? I want to kick gut lancers into my snortin’ widow maker to chase after the money car on that train chuggin’ down the line. I want to let my smokin’ iron cool after drilling a soaked dude with six lead plumbs and laugh as I watch his widow cry because I just reserved his place in the marble orchard. And I want to do it on my PC with keyboard and mouse.

I have yet to hear a convincing reason why nobody has developed a quality Wild West sandbox for the PC. Gun is available and while fun when it released in 2005 it lacked replay value even then. Call of Juarez: Bound in Blood is fine, nothing amazing, and it’s not a sandbox. The game closest to satisfying my craving is Fallout New Vegas, a game that I love. I still play it (heavily modded, of course!), but it is not a Wild West game, it is a Fallout game. Call of Juarez: Gunslinger is fun, but it’s a linear shooter. I crave something like Red Dead Redemption, still a stellar game 7 years later.

There are more than enough PC games to satisfy all of my other addictions. Armor clad, I can kill xenos filth in the name of the Emperor with bolter and blade. The ground trembles under my T-29’s treads as I go hull-down rotate the turret to site the 105 mm gun. Criminals fear me as I prowl the night in cape and cowl. Spaceships are surprisingly easy to fly. I am always on the wrong side of a checkmate against my computer opponent. The sheer breadth of available PC games is amazing, but the absence of a good Wild West game is as conspicuous as a tangle-footed spooney in the doxology works.

Where’s my horse and lasso?

Red Dead Redemption proved that there is a market for a Wild West sandbox. There are plenty of profitable and lauded sandbox games for PC set in diverse environments: Fallout 3 and New Vegas, Skyrim, Assassin’s Creed IV: Black Flag, FarCry4, and depending on your current mood, Grand Theft Auto IV and V (let’s not forget about Just Cause 2 and 3). Try as I might, I haven’t convinced myself of any good reason for the lack of development. I have settled on the explanation that developers don’t believe that such a game would be profitable, but the evidence proves just the opposite. So, I’m at a loss.

Perhaps as I get older my affection for the Old West blinds me to reality and society has lost the allure to this amazingly romanticized period of American history. Perhaps the lack of western movies and the draw of a steely-eyed gunslinger is the reason. And yet, there is Red Dead Redemption and the upcoming sequel (but, tarnation, not for PC!).

I want to hear your thoughts because I need help to understand this lacuna in the PC gaming world. Why do you think developers have not pursued production of a quality PC game set in the Wild West?

Markiplier Is Forbes’ Top Gaming Influence
Augmented reality and Virtual reality; what’s the difference and which is better?