Nidhogg 2 is a game about moving from one side of the screen to the other. It’s also much, much more. It’s also about impeccable timing, leveraging momentum, reflexes and your ability to predict having a knife thrown at your head. With only two buttons to remember, Nidhogg 2 grabs the old cliche of ‘easy to learn, hard to master’ and jams it in your face.

When I first boot the game up, I’m bombarded with a pulsating soundtrack and eclectic visuals. I admit I paused for a second. Although I’ve never played the original Nidhogg, I have seen screenshots. Gone is the blocky minimalism, replaced instead by a claymation-style that I initially found off-putting but grew to love as I played through a few rounds.

In motion, there’s a lot going on. Both the character models and the stage backgrounds are horrible (in a good way), seeing you fight through a variety of gruesome stages and usually the innards of your previous self that still litter the ground. Melee kills are particularly brutal and leave a big stain as a reminder of where it all went wrong.

It all just clashes together in a way that I enjoy, low-pixel, technicolor gouts of blood juxtaposed with the fairly elegant way the game actually handles. The background animations keep things flowing but don’t detract and regardless, the combat demands your concentration so much so it’d take a nuclear bomb going off in your living room to distract. 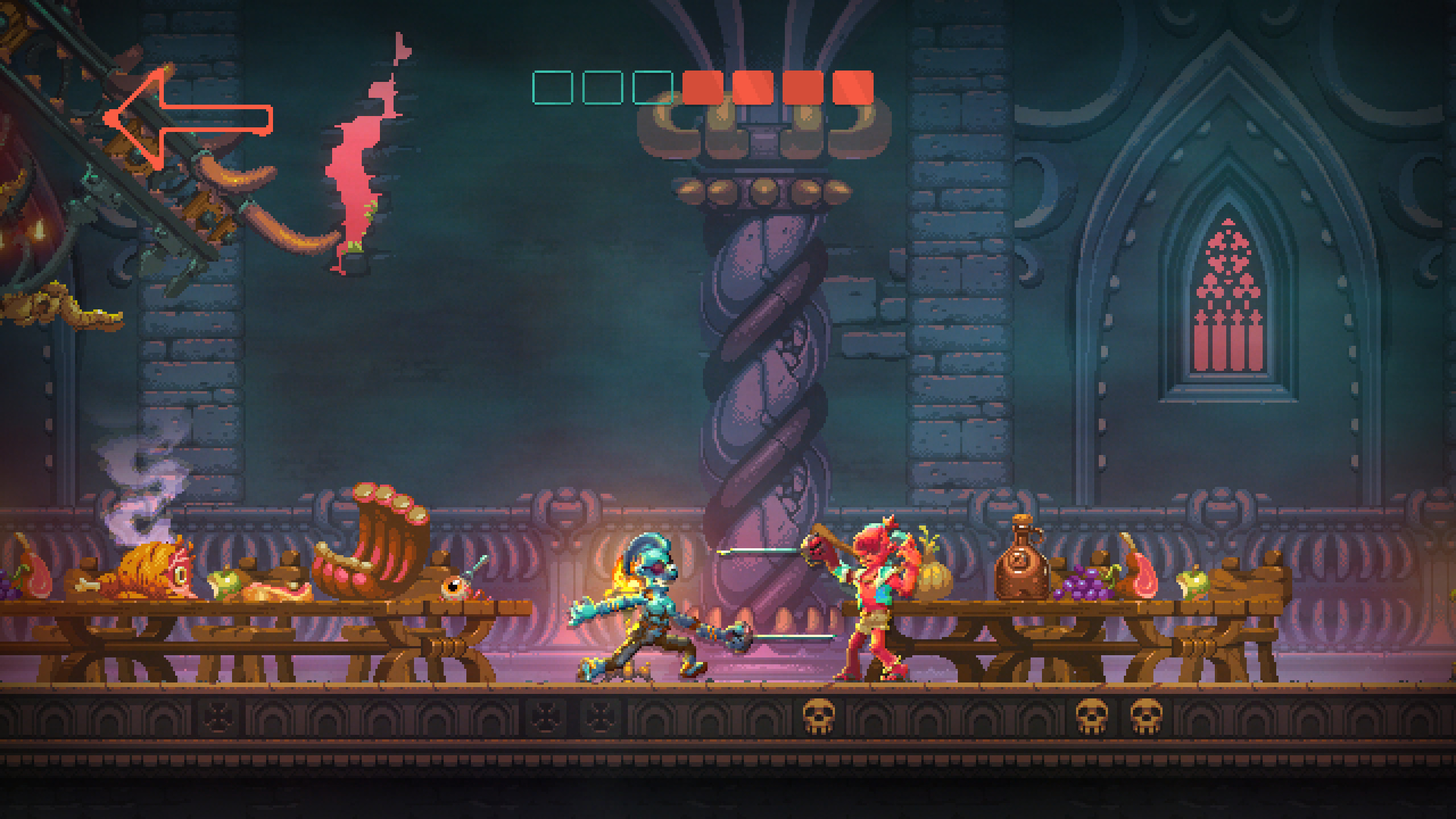 As I jump into the single-player (which effectively acts as an extended DIY tutorial/testing ground), it’s not hard to see what makes Nidhogg 2 great, even if you are fighting terrible AI that switches between running onto your sword or kicking your ass all over the map.

Matches start with two players on opposite sides of the arena. Depending on where you start, you’ll always be pushing to get to the opposite side of the screen. Your opponent? They’re trying to go the other way, effectively making them a roadblock. Respawn timers are low so killing the opponent is often just a way to get some breathing room and make it to the screen edge, bringing you to the next stage where it all begins again.

This tug-of-war mechanic makes for some incredibly tense moments where you realise you’re on the final screen and you only need to get past your opponent one more time. More often than not, these moments devolve into standoffs as you desperately wonder whether you should go high or low.

What I love about Nidhogg 2 is that killing your opponent is always secondary to the main goal of reaching the side of the level. When you have the momentum, it’s not uncommon to simply ignore your opponent, simply slipping past them if the opportunity arises. There are no points for kills, just the unending desire to push on to the next stage.

That said, the combat is great. It manages to be both frantic yet measured, with four weapons that effectively act as a game of rock-paper-scissors-broadsword. One hit is still a kill and there are no hard counters per se, but different weapons have their own pros and cons (expanding on the original Nidhogg which only had the fencing sword).

The hand-to-hand melee is a little overpowered and can cause some frustration, especially when it revolves around being close to your opponent and spamming the attack button. There were moments when I found myself being curbstomped seemingly at random just by being close to an unarmed opponent.

When you add in bottomless pits to traverse, the potential to disarm your opponent with a well-timed swing and the last-ditch option to launch your weapon at your opponent’s head, everything becomes much less predictable but rarely unfair. 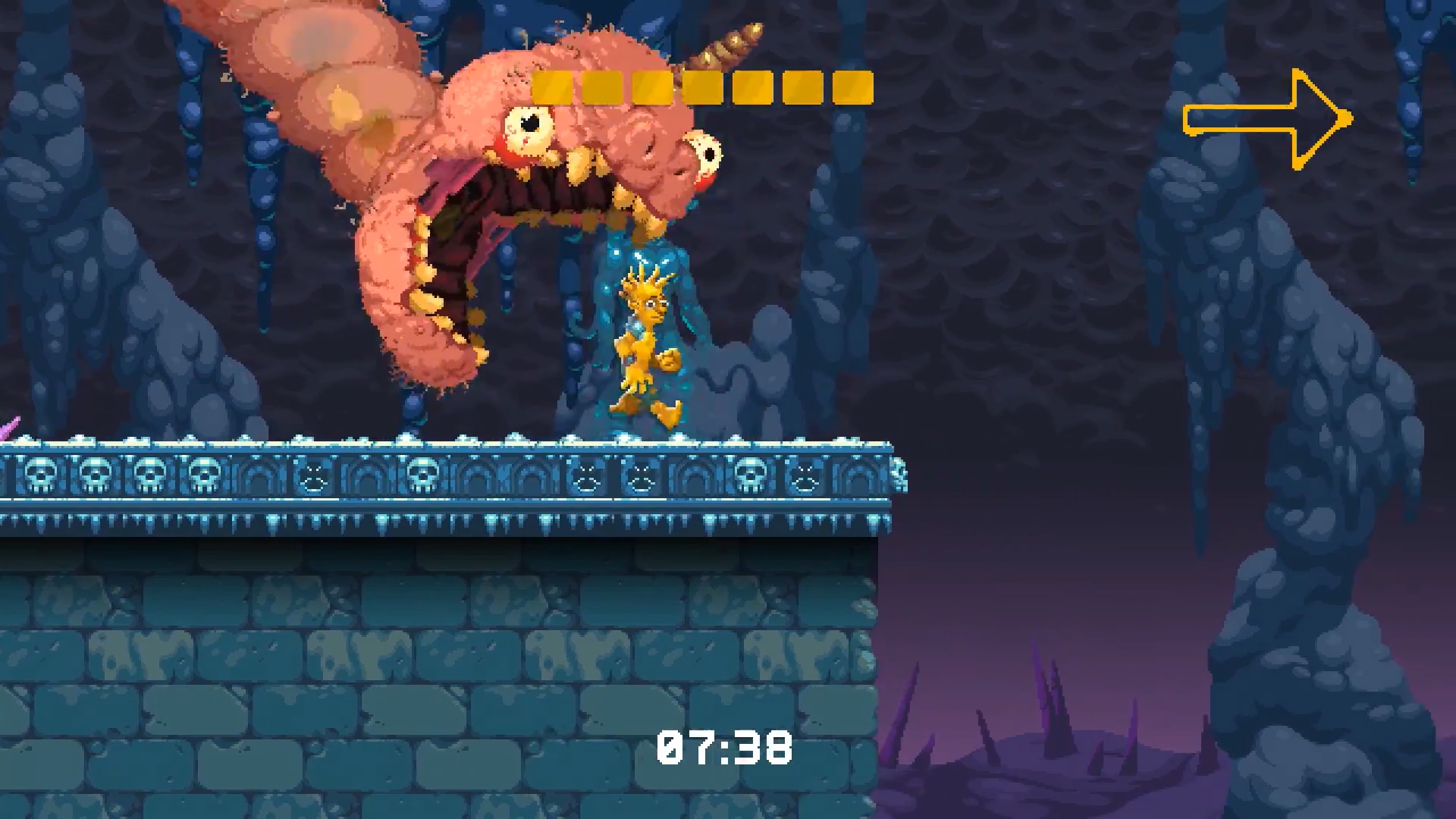 Where Nidhogg 2 truly shines is its multiplayer. While I’m assured the original Nidhogg was better suited for local play around the couch rather than online, the matches I played of Nidhogg 2 were excellent with virtually no lag.

Going up against another real-life human makes the game infinitely more fun. Fights become chaotic and the mind games are in full flow, usually devolving into foot chases and bare knuckle beatdowns when each player decides to hurl their weapons at each other upon respawning, clanging together harmlessly in the air.

My only disappointment with Nidhogg 2 is that there isn’t more to do. Once the initial rush of playing a new game wears off, I can’t help but feel that at its core it just needs something extra. It’d be nice to see a team game mode with 2 v 2 or 3 v 3 or even just a more fleshed out single-player.

As it stands, if you’re looking for a few rounds of frantic fencing action with some friends, Nidhogg 2 has charm and guts by the bucketload.

Darkwood: A Survival Horror Game Its Own Developers Want You to Pirate
For Honor Highlander Character Review