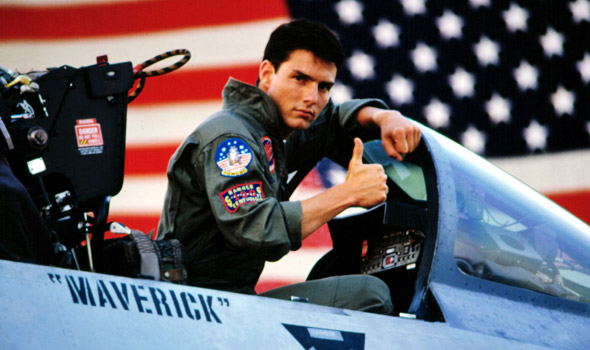 You probably know that Top Gun 2 begins filming next year. Tom Cruise announced the news on May 23 when on an Australian talk show. My immediate reaction was “why?” and I question if there is a need for a sequel.

Top Gun was released in 1986. Filmed for an estimated $15 million, it made around $8 million during its opening weekend, eventually grossing $356 million worldwide. Based on these numbers, the movie was an unqualified success.

The movie was a milestone for Tom Cruise and Val Kilmer, helping propel them both to the ranks of superstars. The movie was made during the middle of a decade considered by many to be the time when the action-packed blockbuster became a genre of its own and helped establish a number of actors as superstars (e.g., Raiders of the Lost Ark, 48 Hours, Conan the Barbarian, First Blood, Terminator, Lethal Weapon, Die Hard). Both Cruise and Kilmer were young, charismatic and talented actors. Cruise already had a number of good performances (e.g. Taps, Risky Business, the very under-appreciated Legend). Kilmer himself had two starring roles (the still hysterical Top Secret! along with Real Genius). Neither, though, had anything comparable to what would come following their performances as Maverick and Iceman. Beyond these two, the remaining cast was a strong group of actors: Kelly McGillis, Tom Skerritt, Michael Ironside, Anthony Edwards, Rick Rossovich, Meg Ryan, and Tim Robbins. Based on the cast’s subsequent body of work, we can again say that the movie was a success.

I was just old enough to see Top Gun in the theater at its release. I remember enjoying it for the flight scenes and because my hometown was the primary filming location. Not much else is memorable with the unfortunate exception of a few humdrum songs. Following the news about the sequel, I re-watched the movie and found that my opinion remains the same: I enjoy the flying sequences but overall the movie is, well, cheesy. The actors provide only decent performances, nothing spectacular, though perhaps this is because the dialogue was uninspiring. There are errors in editing that I didn’t notice as a kid, but now that I am older I just cannot ignore them, and the soundtrack is sleep inducing.

Despite my negative feelings towards the movie, it did enjoy a re-release in IMAX 3D in February 2013 that earned $1.9 million over 6 days. I attribute this to nostalgia (or the awesomeness of seeing the flight scenes in 3D) because the movie has unsatisfying performances, bad dialogue, and a boring soundtrack. The producers must be counting on nostalgia to drive Top Gun 2’s success because there is no logical reason for 12-30 years olds to see a sequel for a bad movie made thirty-two years ago about characters with whom they have no emotional ties.

Apparently, however, just to spite me, they’re making the movie. Perhaps this time around the production will spring for a regulation-sized volleyball net. What are your thoughts on Top Gun 2?