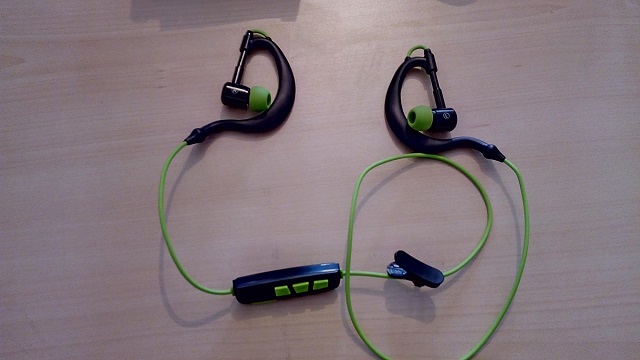 Nowadays everything is connected and not necessarily through cables. A lot of you are probably accustomed to wireless devices by now and as it happens, so are we. In fact, I’ve been testing a new pair of sweat-proof Bluetooth earphones called Mixcder Basso for the last several days and wanted to share my thoughts with you. In addition, we also have a couple of pairs of Mixcder ShareMe Bluetooth Headphones, so we were able to learn quite a bit about what the brand has to offer in terms of audio devices. Mixcder is not a well-known company just yet, but their products are definitely pretty interesting so make sure you read our review for the Basso Bluetooth earphones as our findings may surprise you.

The Basso review unit we received from Mixcder came tucked neatly inside a nice looking green and black case alongside a user’s manual and some spare earbuds of varying sizes. The earphones themselves also follow the same black and green color scheme and the build quality is surprisingly good coming from such a little-known manufacturer. The plastic doesn’t seem to be of the cheap quality, the rubber is very flexible (maybe too much actually) and the earflaps are made of metal, interestingly enough. When it comes to the actual design, though, these Bluetooth earphones will probably be hit or miss with most people. The Basso are certainly interesting to look at and I was actually looking forward to putting them on, however, after looking in the mirror I found myself taking them off immediately for some unexplainable reason.

To be honest, the Mixcder Basso are not really my style, but it’s also worth pointing out that these earphones were designed to be practical above all else. My main beef with them is that they look a bit too much like hearing aids, though that’s not so much of an issue because Mixcder expects you to be jogging while wearing them. These Bluetooth headphones are very useful during any sort of physical exercise where normal earphones tend to fall out of your ears. You definitely won’t have that problem here, as you can adjust the ear hook and wrap the rubber part around the back of your ear in order to make sure that they always stay into place. That said, you’ll definitely also want to make good use of the small hook next to the USB interface and attach it to your shirt because the cable tends to wiggle a lot. On the bright side, the Mixcder Basso are pretty comfortable and easy to set up, but we’re going to talk more about that in the next part.

Much like most other Bluetooth earphones, the Basso can be paired with pretty much any type of mobile device. You won’t need to download an app or anything fancy like that – just turn on the Bluetooth on your mobile device and wait until it finds the earphones. Naturally, the earphones also need to be turned on and this is achieved by holding the multi-function middle button on the interface for a few seconds until the built-in LED tells you that you’re good to go. There are also audio notifications telling you when the earphones are turning on, off, and when they’re pairing. The aforementioned multi-function button is also used to play or pause a track, while the other two buttons act as volume up/previous and volume down/ next. Maybe it’s just me, but I feel like the other way around would have made more sense. All the buttons work even when listening to music from Youtube or elsewhere on the internet so you don’t necessarily need to have any music on your phone in order to make good of these Bluetooth earphones and they can also be used for hands-free calling if need be.

With everything said and done, the great audio quality is arguably the main selling point of the Mixcder Basso. The sound is clear across pretty much any music genre and definitely very loud if you want it to be. Needless to say, the earphones are usually connected to your phone so the volume can only go as high as the phone can take it, but if you like it loud you’ll probably not be disappointed. On the other hand, you may be disappointed by the battery life, which can last you about five hours, on a good day. That’s more than enough if all you’re doing is jogging, but I don’t recommend taking them on a long trip. The charge time of two hours also seems a bit much for five hours worth of battery life if you ask me.

The Mixcder Basso can currently be found on Amazon for about $30, overall a price that’s fair for what they offer since the headphones are pretty sturdy and don’t look like they would easily break under normal circumstances. Mixcder still needs to work a bit on offering better battery life and on their design choices, but they at least nailed the audio quality and functionality parts of their earphones. All in all, this is a good effort coming from a company that seems like it hasn’t been around for long.

Our review for the Mixcder ShareMe will also be up soon so stay tuned for that.

New Razer Naga Chroma comes with 16K DPI and an affordable price tag, at least in the US

Corsair Void post-update pairing problems and how to fix them

Corsair teams up with Dignitas for new gaming mouse and mat