Alien life may have existed long before Earth was even formed 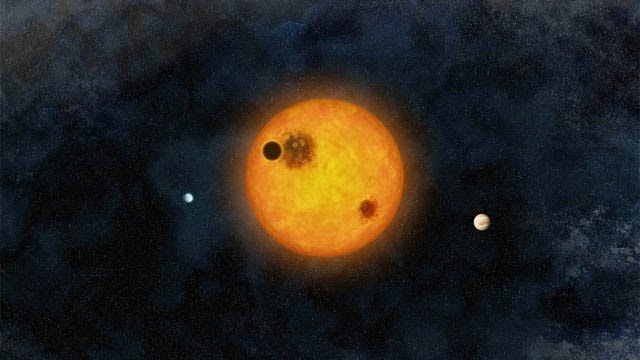 Alien life may have existed long before Earth was even formed

A recent discovery has lead many scientists to believe that alien life could have existed long before Earth or the Sun were even beginning to form. The discovery in question comes in the form of a newly observed solar system that’s believed to be about 11.2 billion years old. To put things into perspective a little, the universe is approximately 13.8 billion years old while our Sun began forming “only” about 4.6 billion years ago. The interesting thing about the said solar system is that it features five Earth-sized planets, each taking only about 10 days or so to make a complete rotation around its parent star, dubbed Kepler-444. While these planets themselves are unlikely to have ever been able to sustain alien life, their presence suggests that Earth-like planets have in fact been around for a very, very long time.

These five planets are much too close to Kepler-444 and thus can not accommodate life, but perhaps elsewhere in the universe there might be similarly old planets that can. At the very least, this discovery indicates that the first planets were beginning to form even when the universe was still relatively young. If alien life does exist somewhere, it certainly had plenty of time to develop, well, at least in some parts of space. Lead Researcher Dr Tiago Campante from the University of Birmingham’s School of Physics says that “this discovery may now help to pinpoint the beginning of what we might call the “era of planet formation.” Not only that, but the fact that Earth-sized planets have been around for the majority of the universe’s history “could provide scope for the existence of ancient life in the Galaxy.”

While alien life has yet to make an official appearance, Kepler-444 and its surrounding planets indicate that there are still plenty of places where we still haven’t looked for it. As for the ancient star, you can find it some 117 million light years away from where you’re standing right now. Unfortunately, we won’t be able to see it in person any time soon, but we at least have a good idea about how the newly discovered solar system looks like thanks to the animated recreation seen below. You can find more details on this important discovery in the Astrophysical Journal.