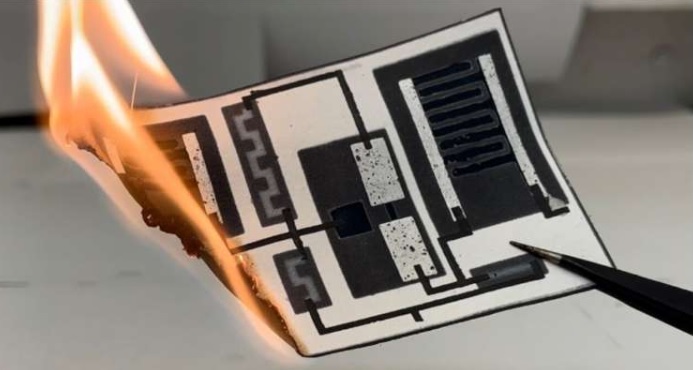 For single-use electronics, a paper-based electronic circuit might be a more adaptable and disposable alternative.  Cell phones and other outdated electronics are a rapidly expanding source of waste. Utilizing components that are created with renewable resources and are simple to dispose of properly could be one method to reduce the issue. Researchers have now developed a prototype circuit board that is comprised of sheet paper with fully integrated electrical components and that can be burned or allowed to deteriorate, as reported in ACS Applied Materials & Interfaces.

The majority of compact electronic gadgets include circuit boards that are constructed from metal wiring, epoxy, and glass fibers. These boards are not suitable for use in point-of-care medical devices, environmental monitoring, or personal wearable gadgets since they are bulky and difficult to recycle.

Using paper-based circuit boards is an option that should be more versatile, less expensive, and easier to dispose of. However, the options available today either call for specific paper or just place conventional metal circuitry components on a piece of paper. Choi and associates instead sought to create circuitry that was easy to build and had every electrical component incorporated onto the sheet.

The group created an amplifier-style circuit using resistors, capacitors, and a transistor that was printed on paper. They began by printing channels in a straightforward pattern using wax onto a piece of paper. The researchers printed semi-conductive and conductive inks, which soaked into the parts not blocked by wax, after melting the wax so that it soaked into the paper. Then, the scientists screen-printed more conductive metal parts and cast an electrolyte made of gel onto the sheet.

Tests showed that the transistor, resistor, and capacitor designs worked as intended. Even with the addition of the components, the finished circuit remained extremely flexible and thin, similar to paper. The researchers revealed that after being set on fire, the complete unit swiftly burned to ash in order to illustrate the circuit’s degradability. This, according to the researchers, is a step toward creating entirely throwaway electronic equipment.