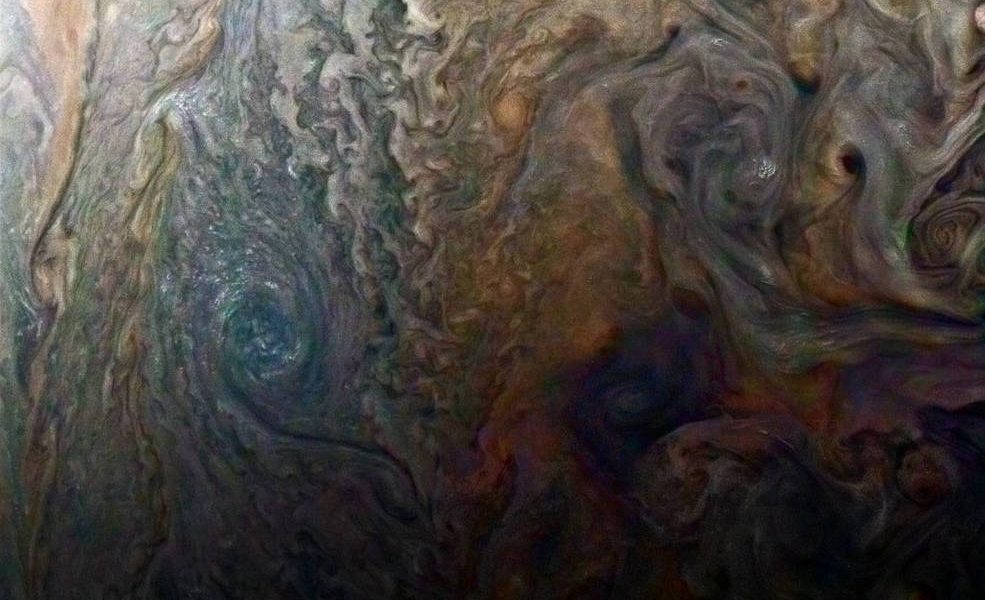 Sometimes you see a photograph that looks so unreal that it takes you a few moments realize that it is indeed a photograph and not a work of art. NASA’s Juno mission has taken one such photo in February as it skimmed over Jupiter’s cloud wreathed skies. The photograph above shows a dark storm and tumultuous clash of clouds as they swirl around Jupiter. The colors have been enhanced by Roman Tkachenko to really bring out the incredible detail, like all of the photographs in this article the image was taken as part of NASA’s Junocam program.

Juncam is one of NASA’s initiatives. They have invited members of the public to help determine where Juno’s camera will be focused. Amateur astronomers upload their telescopic images of Jupiter which are then discussed in the forum. Then members vote to determine which locations Juno should focus its camera on. Once the images are beamed back to earth, NASA uploads them so that members of the public can process them and some of the results are absolutely breathtaking.

On Monday the Juno mission completed its fifth flyby of the gas Giant. This was also Juno’s forth science orbit. All eight of Juno’s science were on and collecting data to beam back to Earth where scientists will analyze it. Previous flybys have proven to be a goldmine of information about our local gas giant and Peer-reviewed papers will be published in the coming months.

Juno launched from Cape Caravel back in 2011. From there Juno began its lonely 5 year voyage to Jupiter. Juno arrived on the 5th of July 2016 and has so far made 5 of its planned 37 orbits. The plan is then for Juno to take its final journey, a planned deorbit into Jupiter’s atmosphere, where the probe will be disintegrated in order to prevent it from becoming space debris.