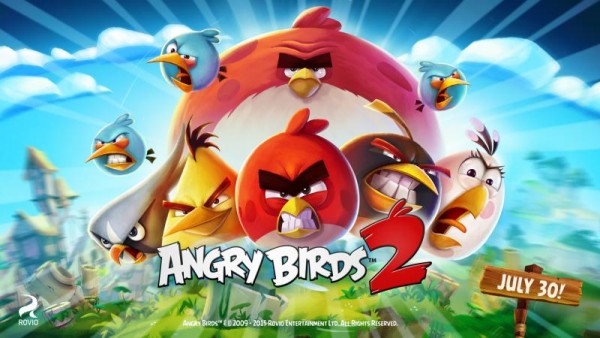 Angry Birds 2 will be released later this month. Wait, Angry Birds 2? Hasn’t Rovio made, like, 50 Angry Birds games already? Well, apparently this one is going to be the first direct sequel (as opposed to the litany of spinoffs). I’m not sure how much more can be added to a story about green piggies stealing some birds’ eggs, but Rovio insists that it’s excited to bring the sequel to life.

“All of us here at Rovio can’t wait to show our fans what we’ve been cooking up! We’re SUPER excited,” Rovio said in a statement on their website.

Angry Birds 2 will be released on July 30. There’s no information yet on the platforms, but presumably it’s coming to all the mobile operating systems. Rovio says the game will hit app stores worldwide and will give out more information on July 28, two days before the release. From the promotional material, we can see that the iconic birds from the original game will make an appearance, and they look, well, angry.

So, what else is there to say about Angry Birds 2? It’s been 6 years since Angry Birds was first released on Apple’s App Store back in 2009. It was actually Rovio’s 52nd game, the first 51 being commercial flops. Rovio was just another one of those unknown developers that pumped out game after game without much success. Angry Birds got big in 2010, with 12 million copies downloaded by the end of that year. In the 5 years since then, something like 10 spinoffs were released (I don’t know the exact number and can’t be bothered counting them), most of them in conjunction with movie franchises such as Star Wars and Rio. The spinoffs all did quite well.

Rovio is calling Angry Birds 2 “the mother of all sequels.” Somehow, I doubt it’s going to be all that, but it will probably make a nice way to kill off a few hours.